One adjunct’s rant, but not mine 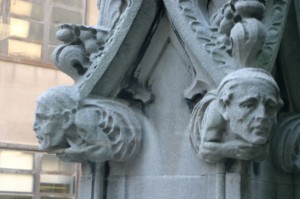 Every few months, someone posts a rant online detailing his or her outrage over the plight of adjunct academics. They can be compelling, but just as often, they’re not. They may even do harm.

To wit: the latest such rant to land at my digital doorstep was this one about Karen Gregory, an adjunct instructor at Queens College, part of New York City’s public-university system (CUNY). A PhD candidate in sociology at the CUNY Graduate Center, Gregory is getting a lot of attention for a syllabus for a course she’s teaching this spring on labor studies, which she posted online. In it, she makes herself — as an adjunct — a subject of that study.

She devotes an entire section of the syllabus* to the “realities” of adjunct academics: tenuous appointments, low wages, and general disenfranchisement from the departments in which they teach. She writes in her syllabus that adjuncts are “instructors” who are treated unfairly, so to “remain conscious of the adjunctification of CUNY,” she asks that her students “not call us ‘professor.'” She also writes that students “deserve to be taught by properly compensated professors whose full attention is to teaching and scholarship,” and that it is “not in [a student’s] best interest to ask an adjunct for a letter of recommendation” because “institutions tend to take such letters less seriously than those written by full time faculty and adjuncts are not compensated for this time consuming task” — or, for that matter, to grade papers, prepare for classes, or any other work outside the classroom.

Leaving aside the awkward position she put her students in by actually writing all of this on her syllabus, I want to focus on her claims themselves. Because they’re largely false.

I have been an adjunct professor for more than nine years, the past seven of which have been at CUNY’s Hunter College. I did some Internet sleuthing and found that Ms. Gregory and I even crossed paths in the Department of Film & Media Studies at Hunter back in 2006, though I do not recall ever meeting her. The fact that she was at Hunter, though, and in my department there, makes her claims that much more surprising to me.

Gregory claims that adjuncts wish not to be called “professor” because we are not “professors,” but “instructors.” This is not always true. I was hired in December 2005 with the title of Adjunct Assistant Professor because I am a working journalist and I was hired to teach my craft in a department with a strong vocational focus. I am paid accordingly, and I have come to know several of my full-time colleagues quite well. I have sat on committees, served as the advisor to a senior honor’s thesis project, and taught courses ranging from introductory classes to senior-level seminars. I have also been at Hunter long enough to have earned a modicum of security, in the form of yearly — as opposed to term-by-term  — appointments. And my hourly wage is high enough that I certainly do not think of it as solely for so-called “contact hours” — or time spent in the classroom. I think of it as a fair wage for the time I put into grading papers, preparing for classes, and writing letters of recommendation.

To that final point, I have written countless letters of recommendation in my nine years of teaching, and many of those students have been admitted to their desired programs. This includes law schools, PhD programs, and all kinds of M.A. programs. You can’t tell me my letters held no sway for those students.

Just to be clear: I am not saying that being an adjunct is ideal. I wish that I had the security and salary of a full-time professor, especially when I am teaching as much as my full-time colleagues and paid a third what they earn (or less). I sometimes wish that I could just be a professor and not also all the other things I have to be in order to cobble together a life in New York City. The living I earn at Hunter would be unsustainable without other sources of income. I wish I had reliable health insurance whose terms were not constantly being debated, and whose future looked something besides grim. I wish that I could grow old teaching college and help steer the department of which I am honored to be a part.

But it is not all bad. I get to teach college — this is an enormous privilege. I have cultivated years-long relationships with students who, I hope, will think of me as I continue to think of my own professors from college — as people who truly challenged me to think, and in some cases, became friends in the process. I get to do other things as well — write magazine articles, anchor this blog, teach a course at another school if I want. I have enormous freedom to pursue multiple careers simultaneously, and I like to think that I’m a better teacher for it. It’s one thing to enter a classroom having just left your well-appointed office down the hall, and another to go in having just come from the field itself.

I also don’t have to worry about not getting tenure. This may sound like a sour-grapes consolation, but think about it: If you earn your PhD and get hired in a tenure-track position, after about six years one of two things will happen — you’ll either get tenure or you won’t. If you don’t, you’ll be asked to leave. Given the rate at which young professors are being denied tenure these days, it’s ironically more secure to be an adjunct. Tenure-track professors at colleges nationwide have come and gone in the time I’ve taught at Hunter.

So to Ms. Gregory, I say this: You have every right to complain about how you are treated, and to ask your students not to call you “professor” or ask you to write letters of recommendation or even expect you to spend one second of your time outside of the classroom on them. But you do not speak for all of us. I am a proud part-time professor of media studies at Hunter College, and I will gladly perform that role for any student who comes my way — in the classroom or outside it.

*It came to my attention after publishing this post that Gregory’s comments on her syllabus were penned by a group of adjuncts who collectively put the same comments on their respective syllabi.

Next post: Bookshares and Travel: Take One Book, Read Many