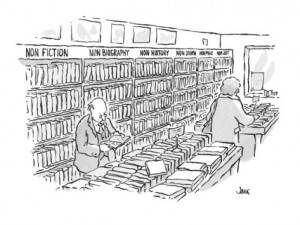 Last week, the New York Times published a piece on its website about the seemingly insurmountable challenge of teaching students how to write. The author, an English teacher, concludes not that students need to read more non-fiction (the vast majority of their high school curricula is already non-fiction), but better non-fiction.

She cites the example of Malcolm Gladwell, who says he wrote his first “Talk of the Town” story for the New Yorker by first reading 100 previously published “Talk” pieces, to internalize the structure, voice, and narrative arc inherent in those short, quirky, often fascinating stories. The example is apt, and instructive. And I can easily relate to it.

Each semester, I spend the first several weeks of a given class teaching my students how to analyze articles and write in a journalistic style. We cover all the basics: the inverted pyramid, attributions, leads, and so on. We talk about the building blocks that comprise a well-crafted piece of non-fiction, and how they work together to create a whole.

And then, after a month or two, I divulge that I don’t have a journalism degree, and that I’ve never even taken a course in journalism. By the end of that semester, I tell them, they will have spent more time “studying” journalism than I have. But that’s not really true. I have studied journalism, just not in the classroom.

But I tell them that I haven’t studied it for two reasons: One, to indicate that journalism, unlike many professions, does not require classroom education to master. You could argue that no profession does, but I’d be reluctant to let a surgeon who hadn’t taken Anatomy 101 remove my appendix. Journalism, I like to say, is an art form. It requires a certain mastery of storytelling, tempered by a commitment to the facts. It demands an engaging voice, an analytic mind, and a dedication to the reader’s understanding.

In a sense, it’s not unlike teaching. The best definition of that profession I’ve ever heard was “Teaching is a matter of working very hard to help someone else grasp something that is very difficult to understand.” It has to look easy in order to work.

But then I have to account for how I learned to write like a journalist, if not in school, and I tell them the story of how I decided to become a journalist in the first place. I was 22, just out of college, and terrified about the future. I had no idea what to do, or how to apply all this knowledge of modern art, critical theory, and 20th Century literature I’d just spent four years amassing, and I whiled my days away at a coffee shop in my college town. I was lost.

One day, I picked up the Smithsonian magazine and read an article about donuts. I hate donuts, but this article had me riveted. It covered the pastry’s history and how donuts are produced. I realized that day that if someone could interest me in donuts through masterful storytelling, then I wanted to be a writer of non-fiction too. More than 15 years later, I can still remember that article, along with moments in the hundreds of articles I’ve read since.

All that reading has comprised a large part of my education in journalism. Some also comes from practicing it, finding what works, and what doesn’t. And the rest comes from teaching it, from having to explain to others how to do this, or why not to do that.

It’s ironic, I think, that students who claim they want to be journalists don’t read newspapers or magazines. Hemingway said that if you want to be a writer, you need to read. A generation ago, this seemed like obvious advice. Today, it strikes students as funny, counter-intuitive, even. And that may be precisely the problem.