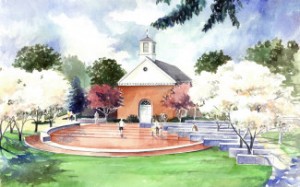 While many universities are beefing up their online course offerings, those of us who had memorable college experiences may console ourselves with one thought: the college will still be there, for anyone who wants to take classes in real time with real professors and fellow students in the same room. It may be a small consolation for anyone who thinks the best way to learn is from actual (and present) human beings, as Mark Edmunson beautifully articulated in a recent Op/Ed for the New York Times, but it’s a consolation nonetheless.

Maybe not for long.

The National Labor College is selling its suburban Washington D.C. campus to whomever may want a collection of buildings that looks like exactly one thing: a college. One likely buyer would turn the place into a high-end retail mall, featuring stores like Prada. Meanwhile, the college will remain in business, but primarily through online courses. Officials at the school say they will establish a new physical plant, but have yet to establish where. One thing is certain, though: it will not be a campus.

The NLC is not an old school — it was founded in 1971 in association with Antioch College, and started offering its own degree programs in 1997 — but then again, no American college or university is very old. The University of Chicago, for example, was established in 1890 and only looks like a medieval university, built in the Neo-Gothic style to evoke the weight of history and knowledge. Stanford University, whose own Sebastian Thrun left his tenured job there to launch an entirely online university, was established in 1885.

None of these schools, qua physical campuses, has any obligation to stick around. Imagine a world without academic settings, where students and professors mingle on the quads, or in the absence of quads, the cafeteria or the library. Imagine a world without that rite of passage for those who choose (and are lucky enough) to go away to school: the first dorm room. Imagine your life without old college friends.

The NLC shuttering its grounds may be an isolated instance, and perhaps other universities will maintain their physical spaces for many years to come. Then again, maybe they won’t.