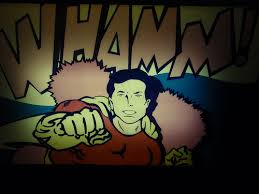 She was a witch with a magical garden my sister and her best friend spent hours – years – plotting to steal from.  These were girls who had an imaginary enemy instead of an imaginary friend.  They knew the value of a worthy foe.

Good foes – real archenemies – do something a friend can never quite do: they create the struggle that defines us.  I’m not talking about frenemies here.  This isn’t about catty rivalries and false friends.  I’m talking honest-to-goodness worthy adversaries, the kind worth pushing against with every kind of wit and strength you possess.  The kind that causes you to discover what kind of wit and strength you possess.

I couldn’t get enough of it.

And it doesn’t stick to superheroes.

Maybe I am easily excited, but this is good stuff.  There is something so soothing, so balanced about this list of paired names. It sets up the plot. It lays bare the order in the world. Even when everyone starts running around in costumes shooting at each other, we will know who to cheer and who to boo.

Of course, most of us do not lead lives with such clear lines.  This is good.  It indicates a subtlety of understanding that is much better aligned with the complexity of the world than simple Good Guy/Bad Guy dynamics.  But this doesn’t mean we need to discount the value of having something worthy to push against.  Internal, external, human, systemic, abstract – it doesn’t so much matter what as it matters how.

We know this in literature, even subtler literature than comic books.  We ask about it all the time: What problem does the protagonist face? What does she fear/hate/desire? This is Fiction 101 and it doesn’t stop there.   But sometimes in real life, we don’t tell our stories this way.  Things just happen to us. Things are so gray.  We hesitate to name our enemies.

I know, I know, dualistic thinking is limited and compassionate understanding rises above antagonism.  I may be forcing life to fit the mold of fiction here, and just because something makes a good story doesn’t mean it makes a happy life.  It is true, too, that in really interesting stories the adversarial dynamic dissolves at some point. Magneto helps Professor X against another bad guy, the environmentalists and loggers move toward collaborative solutions, the problem turns out to be a blessing. It is also true that – for me at least – happiness has more to do with a sense of having tackled something worthwhile that it does with avoiding struggle.

We need worthwhile problems and we need worthy foes.  Not only does this keep our real life stories interesting, but it helps us not self-destruct.  In my sister and her friend’s case, the hours they spent pitting themselves against invisible Malula were hours they weren’t vomiting on ipecac after knowingly eating poisonous plants, or cutting their hair/dolls/eyes with scissors.

With the exception of a certain boy in elementary school, my archenemies have all been as invisible as Malula and harder to name, but the resolve they give me is essential.  They give me the grit to say, I will write this novel without slipping into artistic dissipation. I will feel all my heartbreak and then move on. I will look squarely at the soullessness of the world and yet live as soulfully as I know how.  These feel like worthy – even daunting – things to struggle with.  There is a lot of soullessness out there, and the heartbreak I’ve felt is huge too, damn it, even if it’s only mine. I don’t have any super powers or awe-inspiring costumes.  But I do have better things to do than cut my own eyes with scissors.  I have the sense of agency that comes from taking responsibility for being the hero of my own life.

I have something to push against. I have some things to get done. I owe this largely to my archenemies, who – in dualism-exploding truth – are as true to me as my friends.

Becca Rose Hall is the author of “The History of Us” in the Summer issue of Contrary.

Next post: In her fall from dot-com grace, Jennifer Sultan makes me consider my own