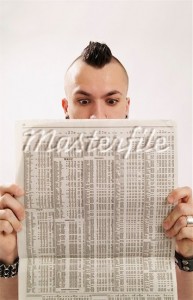 NPR ran a story last week suggesting that contrary to popular belief, millennials — those early 20-somethings who can send a text faster than you can speed-dial your best friend from a cordless phone — actually read newspapers. Not “newspapers” in digital format; newspapers — on paper. Of course, the number isn’t high enough to convince me that we’re not doomed as a civilization, but it’s a lot higher than I’d have thought. And I teach journalism to millennials. I learn what they know about the world, and what they don’t — and how they get their information — every day.

The numbers come from a study by the Pew Research Center’s Project for Excellence in Journalism, published online under the ambitiously sweeping title The State of the News Media 2012. It seems to be justified — it is a sweeping, ambitious report. Still, I have to wonder: should we feel comforted knowing that 22% of Americans ages 18-24 are reading a newspaper every day? These days, “newspaper” could mean AM New York or Metro, slim rags they literally can’t give away in New York City’s subway stations.

Then there’s USA Today, the most-circulated newspaper in the country with more than 1.8 million subscribers as of March 2011, featuring such hard-hitting stories as “USA is 25th best nation to be a mother.”

Nevertheless, according to the study, young people who read newspapers are more likely to hold graduate degrees and engage in civic life, through activities like writing letters to elected officials, running for office themselves, or simply attending a public meeting. And I have to wonder: what does that reflect? Put another way, is reading the newspaper a symptom or a cause of a conscientious life?

Next post: Everyone I know loved Wild Things the best