In the Valley with Dusty Lee… and Gaudi 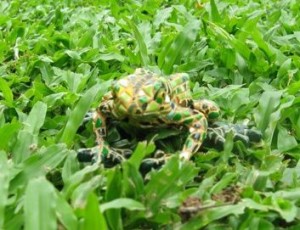 Dusty Lee is fixated on the lawn, her head tilting and untilting, gun metal ears receiving sounds her eyes and nose can’t quite track down. It is barely night, so the light is artificial in our front yard and the blades lie between green and gleam. I stoop beside her and listen. There is a choir in there somewhere, singing a shrill song where they’ve dug down to eat the roots that feed the grass. Mole crickets.  For them, Dusty Lee will drill and paw-shovel the front lawn into a poor man’s golf course.

One evening a gift comes. Dusty Lee jumps, rests her paws on the wrought iron gate, because a friend on the other side is unwrapping the mosaic frog she picked up in Barcelona. “In the style of Gaudi,” she adds.  I shrug and she says in disbelief, “The Sagrada Familia?” My face, the blank wall… “Look him up. G-A-U-D-I.”

Thank God cluelessness is also possibility, because the next day I Google Gaudi (doesn’t Google sound froggy?) and come undone by a fraction of what he’d created. It’s the same feeling I get in this valley, always looking up, looking beyond. You’re never more aware of scale than when you live low or when you feel you’re at the feet of what can’t be possible. The magnitude and the miniscule so fundamental to nature. His spires and shape-shifting columns, vegetables on walls, tiled lizards, stars cut from ceiling, the scaffolding still standing in his masterpiece the church.  The genius of how he saw the natural world and how deeply he’d learned it, so that the ways of nature seemed his own. How he made abundance organic by merging structure with aesthetic.  His seamless synthesis comes to mind when I think about language, my desire to eat any space between the words and what they mean to say and do.

On my rounds in the garden are surprised orchids, their faces in pockets of bright and shadow, their mouths saying O, the O saying Wow. And sometimes I peer into their mischief–their tongues stained and stuck way out. There are littered leaves, one side milk-green, but flipped they sting like red chilies. All patent leather. Pepper. A breeze might suggest something’s in the trees, and on occasion something is. Lizards mimicking the mossed, mottled limbs of the mango tree, their slight heads and streamed bodies, inside of which I half expect a pulsing or the mercury receding down an old thermometer.

I think about Gaudi, a boy with an arthritic body who left behind such miraculous structures. I think about myself learning somewhere sometime to not express what pressed against inside. And I think about me writing…

Kathryn Martins is the author of “There” in the Spring 2012 issue of Contrary.

Next post: Suicide, local. Suicide, global. (And it was already too much).

Previous post: Spring at the End of the World