A Guild of Vergers 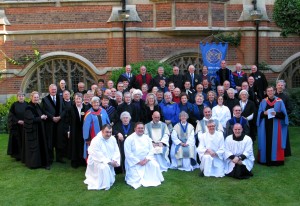 Because I am weird this way, I crashed the Annual Conference of the Church of England Guild of Vergers at the All Saints Pastoral Centre in the English town of London Colnay.

The Guild is not a trade union, not a club, nor is it some sort of sect, instead it is a professional association that promotes fellowship and spiritual guidance amongst the vergers of the Anglican Church.

Vergers care for nearly every aspect of the church building and grounds. A verger’s duties are manyfold. He or she has an important ceremonial position during the church service but it is management responsibilities that take the majority of their time. They prepare for each service as well as weddings and funerals. They clean and starch, look after equipment and supplies. They welcome visitors and give information. As an American verger once said to me so eloquently, “Vergers are the traffic cops of the church.”

An unwritten role of the verger is often that of sympathetic ear. Many of us choose to visit a church when troubled. But often, people, particularly the British, suffer from anxiety when in the presence of authority figures, intimidated by the “dog collars” worn by priests, and feel more comfortable speaking to the person who is holding a broom. “I am not a counselor,” one verger explained. “But I am a listener.”

I was pleasantly surprised when I arrived at the conference to find vergers to be open and generous folk, having a preconceived notion of something quite different. And each verger had a surprisingly firm handshake. You know you’re in good stead when every person you meet gives your hand a solid grasp and pump while looking you straight in the eye. Actually, it was little unnerving. I’ve never seen so many confident people. And that was what I learned about vergers; they may have the background jobs but they are proud of what they do, positive in outlook, and often downright cheeky. And vergers come in all styles; I saw vergers wearing everything from sandals to high heels, orthopedics to running shoes, one was even sporting a pair of gold lamé Converse.

I was given a conference packet with the itinerary and agendas for the week. Sadly, I was only able to join them for the day. I realized the laughs I would be missing when I found the Verger Quiz in the back of the folder. It was full of fun brain teasers such as “What is the Liturgical colour for Lataure and Gaudate Sundays?”

The Annual General Meeting began, naturally, with a prayer. Those vergers literally thundered, as they prayed with a might that threatened to shake down the very walls. I knew then that I was in the company of professionals. Prayers complete, we turned to the business at hand. “The smoke detectors are very touchy,” we were warned, “they will set off easily. Therefore, you are advised to use utmost care when burning your incense.”

We went through the week’s planned activities. Thursday would be Movie Night. And on Friday there would be a raffle. And if anyone has anything that we might offer for the raffle, please let us know.

We went through the usual minutes and business stuff, all nodding off a bit toward the end. And it wasn’t just me. The meeting was adjourned, another prayer, then it was time for lunch.

There was plenty of good-spirited banter during the meal. And I took note when they all sighed collectively over the problem of family readers at weddings and funerals. “When will they learn to slow down and enunciate their d’s and their t’s?”

After lunch, I took the opportunity to learn more about these vergers. They came from all over Great Britain, and a few from abroad. Their ages varied from Louis Huband, in his eighties to Paul Russell, the World’s Youngest Verger aged fourteen.

They had several things in common however. They all viewed verging as more than a job, but a calling. In fact, several of them verged voluntarily, taking on the rather substantial financial obligations of purchasing their own robes and cassocks. But they loved the work. Verger Marcus Smith said it simply, “It is who I am.”

The vergers spoke to me earnestly about their work. “From church door to church door everything has got to go smoothly.”

They each took immense pride in their accomplishments, posts held, roles played. They had a deep sense of tradition and respected their own place in the church’s history. Yet they work with a quiet dignity. “A good verger isn’t noticed,” I was told.

When I asked Paul Russell, the World’s Youngest Verger, how he felt about the job he replied neatly, “It’s got its perks.”
What’s the best part of the job? “Cleaning candles is actually quite interesting.” Not an answer one would expect from a fourteen-year old boy. Who were these people?

Some were lifers, had always been vergers and always would be. But most arrived at verging from other occupations, “I was in the milk industry.” (He was a milkman.) There were those who had been “in the pub industry,” (bartenders), engineers, choir directors, and even a head pastry chef. “I had a real gift for sugar,” admitted Stephen Haude modestly. After winning six gold medals for his confectionary cathedrals, he decided that he hated the business and left to drive a bus (the transportation industry). It was only after he retired that Stephen found his true calling as a voluntary verger.

But it is not an easy job. Once again I turned to young Paul, (which wasn’t really fair because he had only been a verger for a few weeks) “What is the hardest part of verging?” I asked.

“Counting people.” As he is responsible for setting out the communion wafers he has to know how many there are. According to Paul, it is not the counting itself that is difficult but the task is complicated by the fact that people “tend to sway.”

After break everyone left to change clothes for Eucharist. I waited in the church. It was a most impressive sight as they entered and took their seats. They wore their most formal ceremonial robes, making a handsome and impressive group. And if you have never been the only person in a chapel who is not wearing ceremonial robes you might not understand how very odd it is. I regretted my wardrobe choice. But the vergers paid no heed to my awkwardness and made me feel as if I was one of them, even after I stepped on someone’s robe, nearly tripping him.

We sat down to a proper church service. A busman’s holiday, I protested, but the vergers disagreed. “As long as we don’t have to do anything, it is heaven to simply enjoy the service.”

It was a long service, but never have I seen so much heartfelt worshipping. The responses to the Vicar were loud and forceful, but then this is what they do. These people really love Eucharist.

I am no fan of Church of England hymns, I find them outdated and dull. But the vergers let go like they were singing alone in the car to the radio.

The one thing that I did take issue with was the overuse of the incense. Holy Smoke! My eyes watered, my throat burned, and I was certain I would sneeze. Where were those smoke alarms? I watched the verger with the incense circle the chapel as smoke billowed and filled the room. Then he stood by the door, our lone chance for fresh air, and continued to aim smoke at us incessantly. It was like being gassed, only by God. Someone kindly advised me “Don’t breathe through your mouth,” but I couldn’t see who it was.

After the service we spilled into the garden for a group photograph and drank in the fresh air. Someone put a glass of wine in my hand and suddenly it was cocktail hour.

The first night of the conference typically ends with a Gala Dinner and they had kindly invited me to stay. But it was announced that due to budget cutbacks not only would there be no dessert, but also no waiters, so we must serve each other.

No matter. The vergers took it all in stride. So, come dinnertime, I lined up with gorgeous tuxedo and evening-gown clad vergers to serve platefuls of lamb shank. We laughed and joked as we queued. Not one person complained about the reversal of fortune.When it was time to go I realized how sad I was to leave their world and return to the real one. The world where people would be outraged to serve each other while dressed in evening clothes, where people don’t take pride in their work, or enjoy their colleagues, or accept outsiders as one of their own. Where people often shake hands as limply as they live their lives.

Previous post: The urge to write meets the blue day