The audacity of Udacity 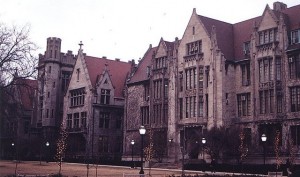 Much of education is aesthetic: The architecture, the “look” of the student body, the general vibe of a university. Such considerations may be superficial, but they aren’t trite.

The feel of a school has a huge influence on one’s experience of it. There’s something about strolling through a centuries-old campus that compels you to excellence. I have vivid memories from both college and grad school of walking past the music building, which at both schools was a neo-Gothic stone structure covered with ivy, and hearing an invisible pianist practicing Mozart or Brahms. It was always inspiring.

So with that, consider this:

Last Fall, a computer-science professor at Stanford University became rock-star famous when he taught an artificial-intelligence course online that attracted students worldwide — as many as 160,000, according to recent estimates. The course was free, students could log in at their leisure, absorb the material on their own time, and review anything they might have missed.

One of the top researchers in his field, the professor, Sebastian Thrun, also developed the “driverless” car for Google this fall, unveiling his Jetsons-worthy creation at the 2011 TED Conference in December.

In other words, he’s a pretty big deal. So it came as a shock when he announced that he was leaving his tenured teaching position at Stanford to start a new university, one without quads, reading rooms, or lecture halls. Indeed, it’s precisely the latter feature of traditional universities that Thrun now eschews.

Udacity, his new venture, will exist virtually. Students may apply, enroll, and attend from anywhere, anytime, via their laptops.

Thrun says that once he got a taste for online teaching last fall, he was hooked. Universities today function more or less like they did 1,000 years ago, and Thrun believes it’s time for a change.

When you think of it that way, it’s hard to argue otherwise. Why should higher education remain stubbornly fixed in the Old World when practically every other aspect of our lives has catapulted into the New?

Perhaps because we haven’t yet figured out a reliable alternative. Online education is the future, yes, but it’s hit-or-miss. The Internet may level the playing field, but that doesn’t mean all the players are equal: there’s NYU’s online curricula, and then there’s the University of Phoenix. Of course, you could say the same thing about traditional pedagogic environments — there will always be students who fall through the cracks, regardless of how much personal attention they receive. As a professor, I can personally attest to this. But online education is so new, and so experimental, that we’ll need to see it done really well, consistently, before we can collectively get onboard — excuse me, online — with it.

Thrun might be the guy to show us. So let’s flash-forward 100 years, to an age when universities exist primarily in cyberspace, and ask ourselves: What did we gain, and what did we lose?

Next post: Dreams and visions: A visit to Mohammed’s underground wedding chapels of southern Ethiopia