William Wegman, His Dogs, and His Soul 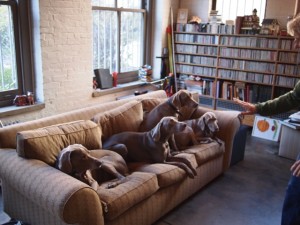 Hanging out with William Wegman and his dogs in NYC. I am there to interview him for my forthcoming Working Artist video.

Up until a few years ago, I worked in the art business and Wegman w as one of my artists.

In my office I had the last photograph he ever took of his first dog, his muse, Man Ray, taken right before Man’s death. It was a haunting image of the dog looking at his own reflection in a puddle. Wegman could not bear to look at it so we never published it.

He’s had many dogs since Man Ray and he obviously adores each of them, talking about them like they are his kids. As the dogs bicker amongst themselves, he describes each one’s idiosyncrasies; Bobbin’s chronic diarrhea, Flo’s bossiness, Candy was a horrible puppy but has turned into a docile old lady, and Penny is suffering from lymphoma, undergoing chemo and so she gets special treatment.

I tell him a theory I have heard that each of us has one pet, if we are lucky, who is a part of our very soul. Wegman disagrees and he begins to speak of each of the dogs he has had with tremendous affection before his voice lowers and he says softly, “And then there was Man.”

I think I found his soul.