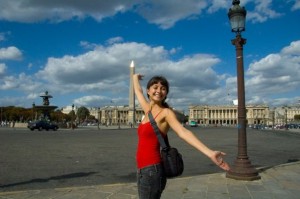 On Friday, I woke up early, around 5:15 a.m. and checked my email. There, amid the junk mail, was a subject line that left me stunned. It informed me that a student I’d had for two courses at Hunter College, in 2007 and 2008, had been killed. Walking down a road on Long Island last Wednesday at 9:05 p.m., she stepped off the curb and was hit by an oncoming SUV. The driver, it turns out, was an EMT and did everything he could to save her. She was only 26.

I couldn’t fathom the news. She was a wonderful student, bright and creative, and a talented filmmaker with a passion for environmental issues. She even worked on a short film that was shown on PBS. She taught yoga. And from her Facebook page, it is clear that she was loved by many, many people. Her exuberance for life was boundless, and totally infectious.

I spent the weekend trying to understand why her death was affecting me so deeply — more, I’ll admit, than the deaths of acquaintances or even relatives in the past several years. The relatives part is easy: I’ve never had an immediate family member die, and most of my dead relatives were quite old when they passed. That’s what old people do, I always said. The friends’ deaths were tough to deal with, but I could almost accept them because they weren’t that different from me, and however morbid it might sound, I can fathom my own death. Sad, yes. But not inconceivable.

A student’s death is different, I now know. As a teacher, you come to love your students. They look up to you (sometimes), and you dedicate yourself to them. Not only to their intellectual development, but to their development as human beings. Just think of your own college experience: the men and women charged with teaching you philosophy or English, film or religion, art or psychology were, in fact, teaching you much more. And you were teaching them. This is especially true, I think, when you’re a young teacher, as I was when this woman was my student. You inhabit a peculiar position. You’re neither the sage, old professor nor a peer, but something in between. And in that middle ground, a unique kind of relationship can grow.

In the years since she was my student, we kept in touch on Facebook, and I always enjoyed seeing what she was up to.

Sometimes events seem to conspire in a way that forces us to think about their deeper significance, often in ways we don’t anticipate. As I thought about this tragic death, I soon began to think about the way her friends were using Facebook to mourn her loss. I struggled with whether or not I should write something on her wall, and thought about it for two days before I decided that, yes, I should. I wondered if I should write this blog post, and clearly I decided, again, that I should. But these were not easy choices to make.

These forms of communication mediate experience, and they turn reality into something else. Something mediated.

I wanted to write about this, to think through the effect it has had on me, but not if doing so would trivialize it or add to the mediated distance and confusion that de Zengotita writes so powerfully about in his book.

I simply wanted to share my memories of Jenni, and my heartache — because that is real.

Next post: What to do about student loan debt?