Notes on a Zanzibar tragedy

by Amanda Leigh Lichtenstein on September 11, 2011 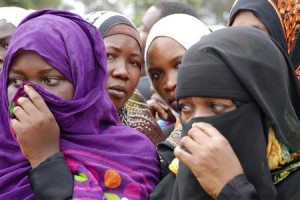 This is not a news report on an enormous tragedy. I don’t have all the facts. No one does – yet. This is me in tears writing down the terrifying reality of a capsized cargo ship, the overloaded MV Spice, and its hundreds of passengers, mostly teenagers and children, who all sunk down in the middle of the night on Saturday, September 10, at 1:00 a.m. or so, off the coast of Tanzania.

Earlier that night, hundreds of teenagers, children, babies, and their mamas, along with other travellers Pemba-bound, boarded this cargo ship that had never been approved as a passenger ship, setting sail for an overnight journey.

The rumour is that not only was this ship not a legal passenger ship, it also had serious engine problems but passed inspection due to a slippery 3 million shilling bribe accepted by those responsible for regulating maritime safety and security.

Ironically, a conference on maritime security had taken place in Zanzibar in March of 2011. I can’t help but wonder who was at the table that day. What was discussed ? How were the power points? How was the buffet ?

Over 600 tickets were officially sold for Saturday’s journey, yet everyone I’ve spoken to assure me that up to 1,000 people could have been on the boat that night, for having paid just a few thousand shillings on the down low. This is standard practice. Overloaded ships are a major issue here, and the use of cargo ships for passenger voyages, a common yet illegal practice. Yet some say that before this ship set sail, even passengers who were accustomed to overloaded boats were cramped beyond a reasonable doubt and asked to get off before the ship departed.

Most passengers on board were returning to Pemba, the sister island to Unguja, after a long Eid celebration with family and friends on the island of Unguja.

The journey to Pemba is notoriously rough. No doubt, most passengers throw up at some point on the choppy waves that define this distinct route from one island to the next. It’s a nauseous, grueling journey that many often take because of close family ties between the islands, as well as opportunity on Unguja that do no exist on Pemba.

On Saturday night, due to the overloaded ship combined with roiling sea conditions, the enormous boat holding cargo and people simply turned over on its side and started sinking, not too far from the northern coast, near Nungwi. No one knows the exact cause.

Passengers began calling family and friends from their cell phones with panicked messages. We’re sinking. We think we are going to die. We need help. Please pray for us. No one knew where they were exactly on the sea, but described being five to six hours into the slow over-night journey.

By two a.m. the boat had completely sunk into the sea. Family and friends started receiving calls by four a.m. confirming that the MV spice was lying at the bottom of the ocean with hundreds trapped inside.

The response? Yes, there was an emergency response. Divers were sent out to sea in search of survivors. Private dive companies went out to sea. Local fishermen volunteered their small dhows to search for people who’d managed to swim their way out of the boat, grabbing onto anything they could – mattresses, fridges, tanks – to float their way to safety.

But a lack of resources, leadership, and strategic information made it hard to coordinate efforts. There was a great deal of confusion yesterday as to where to go for information concerning loved ones who might have lost their lives in this terrifying calamity.

Local residents were told to meet in a large field, Miasara, just near the coast to identify dead bodies brought in on large fishing boats by volunteer coast guards and police. As a result, mobs of people gathered in this space, hovering for information that would lead them back to their lost. A small voice on unconvincing bull horn encouraged people to follow instructions that would keep them at least an arms distance from the four tents set up with Red Cross workers and a meagre supply of gray army blankets.

I went to this field at 10 a.m. with my partner, in search of information about his 42 family members who had climbed onto that boat to return to their native Pemba. We stood in the scorching sun waiting for direction, pressing against the meek yellow security tape, trying to crane our necks to see past the crowds and into the empty tents waiting to receive dead bodies.

At some point in the day, it became clear that more bodies and survivors were being brought in to town near the main port on large ships that had gone out to sea on search and rescue missions. We realized that our presence at Miasara wasn’t helping at all, so we went home and turned on Zanzibar television.

I cried watching familiar faces climb down from boats, survivors, having been in the depths of the ocean, and emerging triumphant with looks of shock and relief on their faces. Grown men were crying. Children looked stunned or exhausted. My partner recognized two of his cousins climbing out of rescue boats. We cried together, held hands, relieved.

Call it a miracle, divine intervention, luck of the draw, that so many did survive, that having been under water for so long in a closed space, they were able to emerge, fight for their lives, and find their way back to the surface of things.

By late afternoon, everyone was talking about this tragedy, and, having left work or home, were wandering the streets, stopping in small clusters to swap information and share condolences.  Waves of people walked to and from the field where dead bodies were laid out for identification. In the streets, sirens wailed. Police vans and ambulances raced at highest speeds to and from emergency sites.

Everyone knew someone who had been affected by the events of the last twenty-four hours. Zanzibar is very small – all are interlinked and touched personally by the strange slow-motion pain of enormous loss.

Our local shopkeeper’s wife had been on board this ship, nine months pregnant, heading back to Pemba to give birth to their child. No one has heard news yet of her whereabouts. When I spoke to him, he seemed resigned that he had lost her. His face was slack, his body, quiet.

Zanzibaris are quite stoic about pain – at least in public. In the late afternoon, I passed my neighbours whom I know each had family members on board that ship. When I asked them about it, they shrugged their shoulders, looked up at the heavens, and basically said, tumeshapoa meaning, we have already recovered. They’d heard the news, wailed if so moved behind closed doors, and were now presenting steely exteriors to the outside world, waiting simply for a body to bury, a funeral to execute.

The word is that there will be a national funeral and three days of mourning while authorities continue to uncover the facts of this terrifying event. And yet, Miss Tanzania was aired last night despite all of this, and as of this morning, no official statement from either the Zanzibar or Tanzanian government. Reports from Twitter reveal that the story was barely covered at all on the mainland, while it was reported on international networks like BBC, Al Jazeera, ABC, CBC, CNN, and others.

What gives many great relief (but deeply confuses me) is the belief that all of this has been written by Allah – all of the great tragedies and triumphs of our time have all written already and we are merely actors in the great human drama written and directed by god. I can see how this world view offers powerful solace at times like these – when inexplicable and avoidable events cause tidal waves of sorrow.

But I don’t believe that this was a necessary act in the great human play that is life. This could have been avoided. There is an element of recklessness, a need for accountability on the part of those who thought it was fine to overload a cargo ship with human lives and all their necessary objects.

I am waiting, like others, for more information, for clarity, for the chance to mourn in public and in private with so many who were linked to those who lost their lives. The numbers climb to somewhere around 225. Survivors number over 500 or so, which means that the total of those on board far exceeded the official 500 reported by the government.

Many of us here in Zanzibar are hoping that something like this will unleash discussion on maritime reforms, regarding the safety and security of passengers who board these large ships to set sail on choppy waters. It also makes me think a lot, on the 10th anniversary of 9/11, about the nature of emergency response plans. How does a nation handle a crisis? What plans are in place to assist and inform? What can anyone do to translate their helplessness into action?

I don’ t have answers. There’s a blanket and sheet shortage at local hospitals. There are far too few medical personnel, a general lack of leadership and direction as to where to go for information. But people are trying their best, and I guess with any tragedy like this, it’s the local people – brave, gutsy, fearless people who do everything they can to make a horrible situation a little better, a little less desperate.

There’s a local meeting at 11 a.m. this morning to discuss fundraising ideas.

There are families being reunited with survivors.

But none of us, having lived through any of this, can ever be exactly the same.

We grapple with our confusion, we deal with our gods, we console each other, we live with the mystery of having survived. 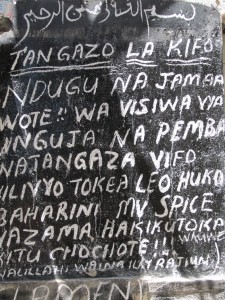 Brothers and Sisters of the islands of Unguja and Pemba: This is an announcement of the deaths that took place today there in the ocean because of the sinking of MV Spice — it is already down, nothing more will come out. God bless the dead and give them a good place in heaven. They have already passed, we are going the same way.