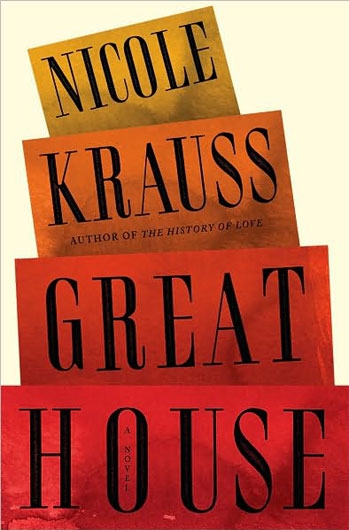 “Great Grapes: Score another point for resveratrol, the antioxidant found in red grapes and red wine. Basque researchers have shown that, in mice and men, it blocks lipid accumulation …” (48 Psychology Today 7-8/11).

Is this literary ? Something about it struck me. I wondered why readers of Psychology Today would notice and/or find interesting an allusion to John Steinbeck. But mostly, I wondered, does this allusion add anything to a paragraph about the way that grapes affect fat in the human body ?

So to indulge in literariness, if I may … the (yes, they are alliterative) literary devices in the above passage include:

Is this “true” liter ariness, if there exists such a thing? In one sense, yes, if I can characterize “literariness” as words that make the reader think about them as more than words. One caveat here: those trained in literary scholarship are trained to interpret  all words as—at once—being more than what they say and at the same time incomplete and insufficient to express “real” meaning. Another way we may think of literariness is “fancy writing,” writing that draws attention to itself as such, writing that is “flowery” (whatever that means), or writing that evokes rather than states, describes rather than tells.

[Spoiler Alert: The picture below shows a rudimentary plot diagram.]

This excerpt from Psychology Today caught my attention because I just finished Nicole Krauss’s Great House. I found it beautiful, but confusing. I would have paid more attention to all the clues early in the book had I known I would need those clues later. I made charts. I googled “Great House + plot.” I listened to Michael Silverblatt admit to Krauss herself that he sometimes didn’t know who was talking. 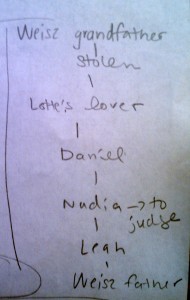 Then I read reviews. The New York Times, The Guardian, The Independent. Still nothing. I’m going to have to read it again. Then I read reader reviews of the book on amazon.com and goodreads.com. Some people felt the same way I did. One person said something to the effect of, “ Get it together, people. I’m not a rocket scientist and I figured it out.” A significant minority of reviewers said they didn’t like the book because it was too elusive, plot-wise, or too literary and pretentious, language-wise.

Where do we draw the arbitrary lin e between literariness and pretention? Is there such a line ? Is it different for each person ? How do you respond to the accusation that that which literary is necessarily pretentious? What, if anything, does literariness have to do with reader response? And, finally, what do you make of Great House?