Godard on Allen/Allen on Godard 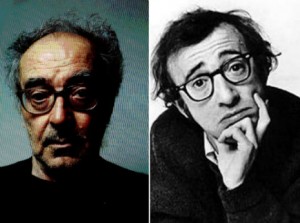 This isn’t timely, nor is it apropos of something else. It’s just a fascinating conversation between two of cinema’s greatest artists, Jean-Luc Godard and Woody Allen.

I happened upon it after a friend shared a 1970s or 80s commercial for Schick aftershave directed by Godard (yes, really — tres chic, tres Schick), which led me to the website Open Culture, where the film was posted. Godard made Meeting WA in 1986, shortly after Allen released Hannah and Her Sisters, and at 25 minutes, it’s shorter than your average sit-com. In other words, it’s worth your time — assuming you give a rat’ s a ss about either director, cinema, or even just the 1980s.