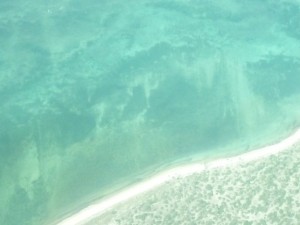 The waters between Dar es Salaam and Zanzibar.

Where were all the poets and writers in Zanzibar? Where were those wordsmiths hiding? Throughout my first year in Zanzibar, I may have been living inside the poem that is this island, but I’d stopped writing poetry, and I felt like the proverbial fish out of water.

I’d defined myself as a poet and writer back in the States, had spent years in residencies and projects devoted to writing and sharing work in community. But no one knew that about me here. And even if they did, it might not have mattered.

Here, I was, for a time, anonymous. I was simmering cassava in coconut milk, gutting squid ink, learning a new language, bearing tropical heat, climbing packed dala-dalas, attempting to diagnose strange skin rashes, misreading body language, evading passive-aggressive rage against foreigners (and my own), and falling in love with a man who is my categorical opposite.

Life on the island is circumferential. Anonymity only lasts so long. Even though there’s an eclectic mix of cultures, people, and personalities, the social life here is a strange one, either defined by heavy drinking by ex-pats and travelers on the one hand, or deeply-rooted Swahili religious and cultural customs, on the other. There’s not much in between, as far as I could tell, except the satisfying but soon predictable stroll through lovely Forodhani Gardens.

Don’t get me wrong – this World Heritage city has its enduring charms. Moonlit walks through its mazes always captivate. And life here is full of small, daily pleasures (spicy potato balls, glimmering ocean, playful children, pitch black nights, the shrill cry of Taarab). But there came a time when gorgeous walks along the beach or a beer at Livingstone’s (named after the famous Scottish explorer David Livingstone who spent weeks at a time in Zanzibar and ended up being a powerful abolitionist voice) just wasn’t enough.

I was craving a kind of community that, on the surface, was not available or accessible. I started to feel the great big absence of poetry in my life and attributed my inexcusable blues to the fact that the poem-maker in me had disappeared. I knew I had to write again.

I’d thought for months about starting some sort of poetry night, but hesitated, worried that this was a Western desire (imposition) that didn’t seem to have a place within the social frameworks of island life. I’d hosted a few writing sessions in my apartment, but time sort of slips away here, and steering a regular meeting just seemed at odds with the way things flow. These writing nights were nice, but short-lived.

Suddenly, it seemed, a gorgeous little bookshop opened just around the corner from my apartment, in a gloriously restored Stone Town building. I was so excited. This was the same shop where I’d made lengthy treks to Dar es Salaam to enjoy its abundance of English-language books. I loved it there and felt at home surrounded by walls of books. Now there was a Zanzibar branch! One day I decided to pitch my idea to host a monthly poetry reading series there. This was back in February, when the world was ripe with revolution. I wasn’t sure what I wanted, but I knew I wanted to create what was missing in my life.

I didn’t have to say much, though. The shop manager was a writer himself and agreed to jump in with me to plan the first reading, which happened to coincide with Busara, Zanzibar’s ultra-friendly and eclectic African musical festival. We settled on busara (wisdom) as the theme for our first gathering, set a date, designed a poster, and posted it all over town.

At dusk that night, I headed first to the smoky foyer of a broke-down palace with a huge inner/open courtyard, where a woman with an elephantitis foot was frying potato chips in a blackened kettle over a roaring flame. I bought an overflowing bag of hot, crispy chips and hurried to the bookstore to set up the space, lugging water, cups, and plates in a large woven basket.

On true Zanzibar-time, people ambled in slowly at quarter past seven and by nine, nearly seventeen people had filled the bookstore fully pumped with generator-fused light and fans. I was grateful. The tone was a little awkward but eager and I was happy to take a lead again after a year spent in quiet observation. There was an interesting mix of Zanzibari and Westerners, students and professionals, everyday people, others who proudly identified as writers. People I’d seen countless times on the streets newly appeared through the poems they read, the ideas they shared.

The unassuming bearded man with a mild limp knew everything under the sun about the structure and beauty of Islamic poetry.  He’d just published his own book of poems.

We agreed to meet again in a month, sharing poems inspired by the idea of money and power.  In the days leading up to the second gathering, I wrestled with how much or little I wanted to actually lead this series. I’d started it because I was hoping it’d inspire writing of my own. Instead, I threw myself into the programming aspects of the night, thinking about the food, posters, emails, and other small details that often get lost in the collective desire to make something happen.

That’s not to say I don’t enjoy those aspects – but leadership here is a very different dynamic. There were various elements to consider, subtle tensions here between insider and outsider, reader and non-reader, local and foreigner, which are often marked by a sense of mistrust or worse, indifference.

The history of Swahili writing is loaded with colonial impositions and histories. Swahili poetry had actually been written in Arabic script, mostly religious poems with a careful lean toward Allah. The first Standard Swahili novel was written under British rule by a Tanzanian author whose intention was to praise the British for their benevolent rule. The Brits played a major role in the standardization (de-Islamicization) of the Swahili language. It could be argued that the whole idea of contemporary poetry and fiction in Africa was imported or at least encouraged by a set of colonial/post-colonial values and implications. Some have even questioned the presence of a literary reading culture in Zanzibar.

What was I really trying to start here, and for whom ?

Luckily, though, it was clear that my co-host was just as excited as I was about the prospect, having participated in something similar while living in Dar-es-Salaam. We moved forward with our planning, trusting that this collaboration, if slow-grown, could be mutually satisfying for all who showed an interest, and that poetry was powerful enough in any language to transcend these perceived borders.

The month of March was all about money and power. It proved to be just as satisfying a conversation as the first, a group of twenty gathered around chips, wine, sodas, juices, and an eclectic, challenging array of voices and poems. There, in that space, people orbiting very different circles had the chance to interface. The university student spoke with the development worker, the foreign teacher spoke with the local citizen, the tour operator spoke to the university student, bound simply by lines of poetry as threads to hold our conversation together.

By the end of that night, we’d decided to call ourselves MANENO (words) after tossing around a few possibilities, and it was decided that we’d try to meet every third Tuesday of the month. April’s theme would be family.

Somewhere between March and April, I promised to build a blog that would feature all the poems read and shared at each gathering.  Through the design process, I became so excited by the idea of a contemporary literary presence in Zanzibar, and through various links and conversations online, realized that a literary renaissance of sorts was brewing in Tanzania, as part of a much larger East African literary revival.

April was another packed month of eclectic guests and poems. The family theme sparked a lively debate on polygamy (a legal practice here) and other conversation on love, commitment, gender, religion and culture. Some were poets who’d made a point to come every month so far, others were curious Stone Town folks or a few guests from London, who’d heard the word and decided to participate. It was actually one of the guests, a professional writer, who suggested May’s theme of love and heartache (the blues).

Last Tuesday was our fourth gathering, and the poems keep getting deeper, the readers and writers, more open and courageous. I often bring poems for those who didn’t write one but still want to read. The energy and presence in the space is always positive and attentive. The night kicked off with a gorgeous poem about a tender birthing moment in Honduras, written by a former aid worker who now lives in Zanzibar.  A few young men wrote about the inherent betrayal of romantic love. An older man read his hilarious blues. One beautiful woman, a writer originally from Australia, read and then sang a poem her aunt had written about a death in the family. It completely shifted the energy in the room, captivating all of us.

I’m amazed each month at how we can all just go about our days, but they’re back-lit now with poem-making light.

And so it keeps rolling. Next month’s theme is about vision and perspective. I’m not sure where  MANENO is headed, what it might mean for Zanzibar or Tanzania or anywhere, but for now it’s meant to be a space that holds what might otherwise gets lost in the daily task of living. It’s a day carved out of the month to listen through the layers. To hear what’s not being said. To question that which hasn’t yet found it’s mark. It’s a chance to peer inward and outward in equal measure, with empathy and curiosity.

I have my own dreams for MANENO – a series of writing workshops for youth, a literary convening/festival that bridges writing worlds in Dar es Salaam and Zanzibar, perhaps even held on a boat between shores, as one friend suggested, a “words on waves” kind of thing. In the farthest reach of this dream, there’s the idea of creating a full-fledged literary arts centre, where we could host readings, workshops, youth writing projects, interdisciplinary events, residencies, conferences, and other cultural activities centred around the power of words and stories.

But that’s down the road, and it can’t be my dream alone because, for many reasons — cultural, political, spiritual, emotional, everything – it’s really not about me at all. It has to be what people want and crave, and it can’t be imposed or hyper-programmed. There’s also so much more to learn about what has already thrived here in the region as far as Arabic/Islamic poetic traditions, and see MANENO as a single thread in its textured literary fabric.

I say all of this really because I’m talking myself down from the programming ledge, the impulse to put my robust American-style organizing skills to work. I admit, MANENO has perhaps brought out the over excited teacher in me. But more than ever, I’m keen to tune into how MANENO might respond to a set of needs and desires rooted in this particular community, at this present moment in literary history.

So for now, I’m happy to strike a literary match to Stone Town, and do what I can to fan poetry’s ancient fire.