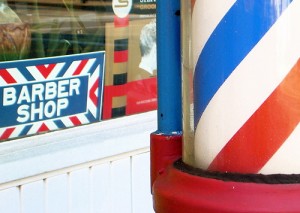 The little shop sat in the shadow of the legendary Kodak tower on State Street. A raw part of the city, drained by suburban retreat and battered by countless soul-chilling storms endemic to cities on the Great Lakes. Immigrants came there a half century before from Ireland, Germany and Italy to establish themselves as craftsmen of the old world, hungry for a life in the new. Plenty had changed since then. Prospects for living that dream were worn down along with eroded curbsides and failing streetlamps. But many of the same people remained. Cosmo was from Palermo, and he carried a storied lineage of making pampered customers look good with an old school method that was light on props and heavy on tradition.

Cosmo’s little place, discreetly tucked within a half deserted strip of shops that included the digs of a shoe cobbler and a sign maker, was my father’s favorite barbershop— and by extension, mine. It’s a right of passage of sorts for a little man to start getting regular haircuts. And it was plain to me even at eight years old that as far as my dad was concerned, no one knew hair like Cosmo.

What I remember most clearly about the little barber was the warmth with which he embraced my father when we walked in on a Saturday morning. There was nothing feigned about it. His hug described a sincere appreciation that my dad had remained a loyal customer, and Cosmo intended to keep it just that way.

What I also remember was the crispness of his smile, accented by the sheen of his midnight black hair. Cosmo was old school in every mode and implement. He used Italian pomade, likely imported from family that still owned shops in the villages surrounding Palermo. With a brush of his hand across the surface of a palm-sized cup, he’d whip up a seamless gloss from neck to brow.

But while sharp, Cosmo was never packaged. Everything, from the smartly pressed white shirt to his polished wingtips, seemed necessary as a matter of trade, not pretension. He embodied his craft.

Sitting there, waiting for him to begin his work, I’d smell the smells  so unique to those shops. Clean, only lightly fragrant, all concealed within little round jars and long necked bottles of green and blue liquids. Lavish powder dashed from an oversized brush. Warm barber’s shaving cream dabbed on your neck.

Cosmo spoke with a richness that conjured images of great basins of wine made in the same village where you lived, and sumptuous yards of pasta pulled from a roller passed on for five generations. I was never sure of everything he said while he snipped away with immaculate precision, but I loved hearing words roll off his tongue. The texture of his accent was soothing, nearly a lullaby. A gifted conversationalist—as any good barber should be—he kept the discussion moving without pause even while gliding a straight razor behind your ears to be certain every line was perfectly clean.

When he worked, his movements were  careful and deliberate. Nothing was rushed, no matter the time. Doing the job right was his goal—and that in turn afforded a living—but the reward, to be sure, was doing the job right.

One last thing sticks out in memory about Cosmo, and it stands in contrast to the rest of what I remember so painfully that I’d be a liar to leave it out.

Cosmo was big on making you “feel” the process. It’s almost as if back in the old country, he’d learned that if your customer didn’t really feel it, then he didn’t get his money’s worth. So when we got to the hair-washing part of the cut (Cosmo would do this after his first round of clipping), I braced myself. I knew Cosmo would take hold of the scalp scrubber—a palm-held brush with ten little hard rubber spikes—and work my head like he hated me. No—like he wanted me to die.

I’m not exaggerating when I say that my eyes teared when Cosmo worked my scalp. I felt like I was absorbing 50 years of pent-up frustration.  Sometimes I’d say something to him about it and he’d reply in broken English, “Oh, too hard? Ok.”  Then he’d drop it down an octave, which was still hard enough to make my cheeks tingle.

Cosmo followed the scalp torture by rinsing my hair with scalding hot water. Almost every time, I’d tell him it was too hot, and he’d say, “Well David, it needs to be hot… but I turn down.”  Turning it down meant I’d get barely-able-to-remain-conscious hot instead of 3rd-degree-burn hot.

I was never so happy as when Cosmo finished the hair washing. The experience was like being pulled from one of the calmest, most serene places you can imagine, tortured for five minutes, then returned to tranquility.

Thinking back on it now, I’m left with a contradiction that’s still hard to reconcile. It’s possible that Cosmo didn’t think it was wrong to scrub my scalp with the same ferocity as grating a block of Pecarino Romano. Same for the scalding hot water.  It’s possible that to him, that’ s ju st the way things should be done. Maybe that’s how he was trained and had always, for years and years, worked his trade. But there’s no denying that the result was painful.

So the question remains, and it’s one I’ll never be able to answer with evidence either way—did Cosmo inflict pain as a matter of what he considered to be proper technique, or did he enjoy it?

When I was a kid I’d almost always give someone the benefit of the doubt about something like that. Now, I’m not so sure. Intervening experience has filled out the picture on understanding peoples’ motivations—often the hard way. The truth is, it’s altogether possible—maybe even likely—that Cosmo was at once a master craftsman and a sadist.

Next post: MANENO — a few words on the making of Stone Town’s monthly poetry reading series