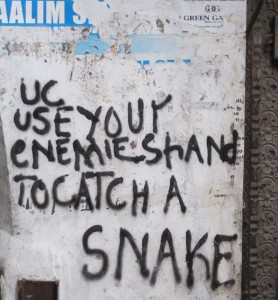 Swapping Swahili riddles in Zanzibar is like tying a literary bow around a friendship and pulling tight until the two of you are bound up together in giggles and amazement. Maybe riddles have lost their literary panache in America, but here, there’s something electric and utterly vivid about riddles.

Calling out the word kitendawili (riddle) sets the world spinning in all directions. It’s a knock at our imagination’s door. It’s the collective inner light switched on, the literary engine humming, unruly winds blowing in a new kind of air.

When someone says kitendawili here in Zanzibar, you better just press pause on life and respond with a hearty tega! loosely meaning go ahead – just try to trap me in your literary snare! With that charged exchange (Kitendawili?! Tega!) everyone leaps into a joyful mind-parade of acrobatic poetics.

I would not have known about the Technicolor world of vitendawili (riddles) had I not been able to escape Stone Town last Friday. My world had been lived in shades of gray after three days of torrential rains trapped us indoors for long stretches of random HBO, greasy fried omelette’s, and cinnamon coffee.

I know it’s really lame to complain even in the slightest about living on an island described by some as paradise, but I admit, I was feeling blue after spending three full days in my stuffy apartment when I could have been half-way to Mozambique and back. I wanted to blame it all on the masika – Zanzibar’s notorious rainy season. But there were other obstacles as well: missing keys, a sink full of decaying dishes, a heaping pile of dirty laundry. A certain feeling of je nais se quois.

By Friday my stir-craziness had reached frenzied, epic proportions. Tilting my head skyward made me dizzy. I could not take comfort in another Cadbury chocolate caramel bar to make myself feel better. I could not take another predictable walk to the market through narrow, flooded streets only to buy yet another kanga in a feeble attempt at retail therapy. So, hopping on the back of a rented Vespa on Friday morning felt like an enormous victory.

I’d beat my devils; I was winning in the leaving game.

That afternoon, we rode so fast out of town that I felt like the wind would rip my cheeks off my face. The sky had cleared. The streets were pocked with enormous mud puddles. We stopped to buy sunglasses, roadside, next to heaping piles of oranges stacked neatly in threes.

We wound our way eastward, detouring through the ancient 5th century city of Unguja Ukuu for a little picnic at Menai Bay and then winding back to the road to Jambiani, the longest village in the world, it seems, stretching for miles along Zanzibar’s eastern coast. We decided to stay for the night at a strange and slightly depressed lodge where mosquitoes ate us alive that night, waking us every two hours, terrorizing us with their incessant buzz, bellies full of blood.

No matter. Even the mosquitoes had a certain charm just by the sheer fact that they were Jambiani mosquitoes. We arrived in the evening and so, while waiting for our room to be prepared, we lingered by the rugged wooden fence set between the shoreline and the lodge’s seafront garden. There, a gaggle of children gathered and lingered in the twilight.

They kept to themselves, playing, giggling, pushing, shoving, falling lacksidasically into the sand. The girls wore tattered, unzipped ball gowns and shimmery dresses. The boys wore kofia, t-shirts, and slacks. They slowly started inching their way toward my boyfriend and I, perhaps gathering the courage to speak.

As soon as we greeted them, a few quickly hoisted themselves up on the top of the fence and started chatting with us. We exchanged names. One bragged about getting permission from her parents to stay up as late as 11 p.m. to watch television.  Another told us he was 200 years old. A small toddler burst into tears when my white, freckled face came too close to hers. It was a brilliant little moment, the sun going down, all of suspended there like swinging in a hammock between sea and sky.

Out of the blue, a tall, slender girl shouted, kitendawili! We answered tega! – ready to be tricked.

She started with this one:

We were stumped. She, the riddler, grinned and waited, delighted that she had stumped us. No one knew the answer.

As is the form with Swahili riddle performance, the listener can buy some thinking time by asking the riddler if she can “give her a city” (nakupe mji?). The riddler says yes, of course, and waits for the listener to throw out any city in the world. Say, Cairo, for example. Or Chicago. Anywhere!

Here’s where the magic of Swahili riddles really happens. Inside the riddle space is a surprise story-within-a story where the riddler gets to show off how clever she can be by spinning a travelling tale to the given city and within her story, possibly revealing the answer to her own riddle!

This is ridiculous, playful, outrageous storytelling at its finest. The riddler can make up anything she wants, often assigning herself and her listeners a fantastical itinerary of visits and meals. The riddler goes on for a while, mentioning what she ate, who she saw, what she read, heard and thought about while visiting this imagined city.

Listeners gasp as they hear themselves appear in her story, giggling if cast in funny roles, protesting if assigned to see or say things that embarrass them. The riddler performs her improvised story until she feels like its time for the great reveal – the answer to her riddle.

By this time, you’re so lost in her travel story that you forget where you are in the riddle, your mind having just traveled at such great lengths that you start to feel dizzy with excitement. Yes, yes! Tell us the answer already! If by that point everyone is still stumped, the riddler herself reveals the answer. In this case, the answer is (drum roll, please!):

Everyone burst out laughing, delighted by the image of something so familiar (rice and beans) transform into something entirely fantastical simply by imaging it to be otherwise. As with most riddle answer revelations, there’s usually a great big over-performed a-ha moment. Ohhhh! I get it! I see it now! Ah, that’s right! A sense of relief and resolution follows. A feeling of having been let inside the inner gates. That you belong in this hilarious laughter circle, ready for more. The literary bow has been tied. And you trust that more laughter’s on the way.

Our young riddling friend threw out several more vitendawili that night until it grew so dark we could barely see the shadows of our own hands.

Nyumba yangu haina mlango // My house does not have a door.

The riddler’s last riddle stuck with me, mostly because she was a little shy to tell it, but still lunged into it with laughter and confidence:

Apparently there is a whole category of riddles devoted to race and power, developed during the colonial period, mostly to poke fun at those in power, but this one about the tea cup was actually sort of sweet. That night, we got so delirious with riddle-swaps that we lost track of time. The children ran off laughing back home at around 8 p.m., which felt like the heart of night, above us just a pitch black sky full of glass stars.

By the time we roared back to the city again the next day, I was hooked on vitendawili, hungry for more of those transporting stories that draw you to cities and countries, names and images you’d never combined before in your mind before that moment. I loved the adventure of it, catching glimpses of each riddler’s fantasy travels through the particular tales they spun.

One threw fire in Cairo. The other ate dinner with the Queen in London. Another met my parents in Chicago. Another rode horses in Mongolia. It was all possible within the brackets of a riddle.

The night we got back to Stone Town, we stayed up late with my Swahili neighbors Khadija and Bishara, and I sheepishly started swapping riddles. There, lounging on a wide mat under the night sky, I threw out the first kitendawili, thinking I’d show off how clever I was to remember the ones I’d learned in Jambiani. Well, after the first one, I realized I was going to get buried in their avalanche of riddle knowledge. They, along with Babu Ali, my Zanzibari boyfriend, were experts who knew thousands of riddles by heart, and one by one, they laid them on me and just kept going – Tega! Tega! Tega!

Bishara dazzled us with a sobering stunner – one about HIV/AIDS:

I told this one:

Watoto wangu wanapigiana, na alafu ninawala // My children hit each other and then I eat them.

Khadija told this one:

And Babu Ali told this one:

There was a certain mathematical measure to our joy – for each riddle swapped, our happiness increased tenfold, giggles and wonder growing in abundance. We were doing the collective work of seeing each riddle’s packed picture, every punch of color, sound, and image.

We could have kept going that night. It was only the sudden rain that chased us back inside.

Back there in the stuffy apartment again, I felt like the world outside was drenched in a kind of electric light, had taken on a luminescent sheen since the last I’d pondered it days ago in my deep funk.

Things again were not as they seemed, but much more.

Riddle-swapping has a sort of tenderness to it. Without saying so, you agree to step child-like into a world full of wonder with others just as eager to be tricked and fooled, led unabashedly on imaginary travels to strange cities in which all appears new again, the traveler is at the helm of her ship, and all ears and hearts are tilted toward the poem.

Your mind, too, feels the acrobatic stretch of a new metaphor.  A bowl of rice is a soccer field, a disease is a spirit, a woman is a teacup, a well is god’s cup. The riddle promises that life itself is puzzling and stitched, performed and revealed, shared and negotiated.

Suddenly everything is in relationship to everything.

We may spend decades drifting in and out of imaginary towns searching for answers already embedded in the hour. 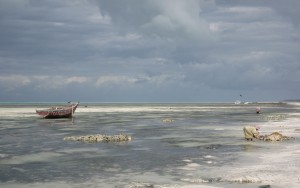 Previous post: Soylent Yellow is Peeps! and other Easter confections