Why I love business news 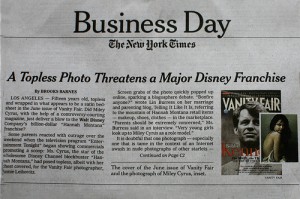 People are often surprised when I tell them that my favorite section of the New York Times, a newspaper that’s still delivered each morning to my front stoop, is business.

Their surprise is reasonable enough: I have degrees in the humanities, not economics or finance, and I don’t make a lot of money, have no investments, and would rather take out my eyeballs with a melon-ball scooper than attempt to make sense of the S&P 500.

But their surprise also proves that they have a limited and pejorative understanding of business. They assume that business news merely chronicles and congratulates the partners of Goldman Sachs on yet another multi-billion-dollar coup.

If anything, it does the oppos ite.

It’s a cliche to say the world revolves around money, but it really does. And the business section provides a context for breaking news you won’t find elsewhere. Everything from smart cars, to that weird new ad campaign, to Charlie Sheen‘s recent crack-fueled romp through American Big Media is fair game. What’s more — and this should appeal to other humanities types — the business world is a hotbed of creative ingenuity. Because the people who start companies, like it or not, tend not to be econ-jocks but former English and philosophy majors with a lot of vision.

I learned this more than 10 years ago, when I was a reporter at a business magazine that covered the dot-com boom and bust of the late 1990s and early 2000s. Most of the “dot-com kids,” as 60 Minutes dubbed them in early 2000, behind all those crazy businesses that sprouted up like mushrooms after a heavy rain didn’t know squat about protecting the bottom line. (And sure, a lot of them failed, but plenty survived; and, indeed, many that did changed the world.)

With all this in mind, I’m anxiously anticipating a new documentary making its world premier next weekend at South by Southwest in Austin, Texas. “Something Ventured” tells the stories of companies like Atari, Cisco Systems, Genetch, and Apple: how they got started, what their founders hoped to accomplish, and how Silicon Valley in the 1970s and ’80s became nothing short of a modern-day Renaissance.

The film’s producers say they hope the movie will dispel the idea that business is bad, a common trope ever since the financial crisis of the past few years. And I hope they’re right. After all, in 2011, when we humanities types wax philosophical about Marxism, and socialism, and Trotsky, and the Prague Spring, and political uprisings in the Middle East, we’re often doing so on our iMacs and PCs, or even via Facebook, Twitter, and text-message on our iPhones and ‘Droids.

To me, that’ s intere sting business.