What does it mean to write like a girl? 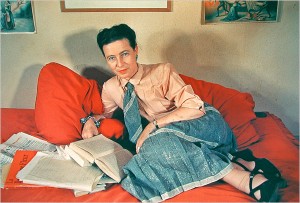 In both of these recent stories, the issue of girlness, or what it means to write “like a girl,” takes center stage. The VIDA count revealed major gender disparity in content published in top literary journals and book reviews, and the LA Times’ heading and article had a not-so-subtle undercurrent of “Jonathan Franzen beat by girl.”

As we can all remember from our days in primary school, for a boy to be beat by a girl is a major upset. It means he not only performed poorly, but so poorly that a girl, a member of the weaker sex, could pummel him. In primary school, to do almost anything “like a girl” means to do it in a subpar or embarrassing mann er. Visit any elementary school playground and you’ll hear little boys ridiculing each other with epithets like, “You throw like a girl,” or “You run like a girl,” or “Stop crying like a girl.” In middle school, high school, college and beyond, the more colorful “like a pussy” is often substituted, but the meaning is the same. The message here is that to be female is to be physically inept and emotionally volatile.

I wonder about this equation of femaleness with ineptitude or emotional chaos, particularly in relation to the VIDA count. What caused the gender disparity revealed by the count? Certainly, in the case of the book reviews, one could speculate that there’s an element of very overt gender discrimination. Editor of X publication has so many books to review per issue, and chooses (consciously or not) to review more men than women. In the case of published books, it’s easy to tell the gender of the author, and easy to pick male authors over female to be reviewed. In the case of literary content (poems and stories published), the issue becomes trickier. It is often possible to tell the gender of the author of a piece of writing on the slush pile by looking at the author’s name, but I wonder if there aren’t other markers identifying female writing.

I wonder what those are, and I wonder why they are so often interpreted as “less than.” Certainly there are some instant tells that can reveal an author as female. For instance, if you can’t guess that Anne Sexton is a woman, her poem “Menstruation at Forty” is a pretty obvious tell. Similarly, women writing about themes like childbirth, infant care, or the bounciness of their breasts while jogging are easily made as women authors.

But are there more subtle tells ? I was out with a good poet friend a couple of weeks ago, who told me that one of the reasons she thinks she’s had a lot of success publishing is because she (self-described) writes like a man. I had to wonder what that means. Is there something essentially male about the writing of Franzen’s Freedom, for instance, that readers find more appealing, or familiar, or less threatening ? If so, what is it? French literary theorist Helene Cixous asserted in her essay “The Laugh of the Medusa” that women should break away from the phallogocentric, linear narrative, and shoot for a more circular, disjunctive, “feminine” writing (l’ecriture feminine). Luce Irigaray in “The Sex Which is Not One” makes similar claims, again relating writing styles to genitalia (vulva = circular, multiple, non-linear writing, penis = linear, penetrative writing). Cixous writes of the woman who ascribes to masculine styles of phallogocentric writing that she “cuts herself out a paper penis.”

I’m hesistant to accept these analyses though, because I think they reinscribe notions of women as fractured, emotionally driven (“Stop crying like a girl”) beings incapable of operating in a linear fashion (“You throw like a girl”), and consigned instead to the realm of the disparate, the disjunctive, the associative, the intuitive (“Mrs. Dalloway, you run like a girl.”).

As a poet I think about this a lot because poetry is particularly open to the sort of circular, “feminine” writing Cixous describes. Furthermore, my writing is often disjunctive (but then so is Paul Celan’s, and so is Charles Berstein’s, and so is Nathanial Mackey’s). Which leaves me really hating the way that styles of doing anything, but particularly of writing, are gendered. Am I revealing myself as a non-essentialist, Judith Butler toting, feminist theorist? Maybe. Am I cribbing from my dissertation prospectus ? Definitely. But my point: maybe if we stopped trying to assign gender to all sorts of activities and ways of doing things, if we allowed people and their works (their writings, their athletic achievements, their ways of showing emotions) to just be, instead of being “like a man/boy” or “like a woman/girl,” we’d be closer to root of gender disparity, the insistent splitting of humanity into discrete genders, and we’d be helping to begin to eradicate gender discrimination.

Next post: Healing Chant in the Face of the Nuclear