The ‘former majority’ wants a break 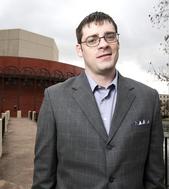 Photo by Kelly West for The Statesman

A student at Texa s State University has a bone to pick with higher education: white men, he says, are under-represented on today’s campuses. The Iraq War veteran returned home and enrolled in school only to find that scholarships existed aplenty for minority students, but none for guys like him. So he decided to do something about it. As an earlier trailblazer of racial justice, Rosa Parks, showed us, change starts with just one person… right?

The Former Majority Association for Equality, a Texas-based nonprofit, is behind the $500 (!) scholarships, which will be awarded this summer to white males with at least a 3.0 GPA.

“I felt excluded,” the student, Coby Bohannan, told the Statesman. “If everyone else can find scholarships, why are we left out?”

While Bohannan, who is president of the FMAE, is actually right about whites being a minority in Texas — recent census data shows Hispanics accounting for 2/3 of the state’s population — does that mean white men are disadvantaged? As a group, I doubt it, but Bohannan says that his family didn’t have the resources to send him to college. Very well.

But it’s simply not true that scholarships for white men do not exist elsewhere. About 38 seconds into an Internet search, I found this list of scholarships available exclusively to white men. Of course, most of them are for HBCUs, or “Historically Black Colleges and Universities,” like Alcorn State University in Mississippi and Alabama A&M.

Somehow I suspect that Bohannan wouldn’ t wan t to enroll in one of those schools.

Next post: Alphabet power and orthographic ghosts: The short story of Swahili script

Previous post: Antinomy, the great ladder of inferences, and the burning