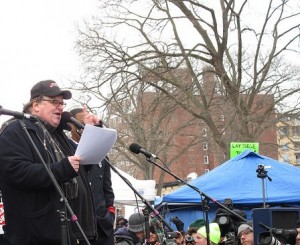 Michael Moore speaking in Madison March 5. Photo by Photo by StretchyBill, via flickr.

In between finishing my PhD, planning a wedding, and writing poetry, I’ve been trying my hardest to keep up on the pro-union rallies that have been happening in Madison, Wisconsin. I grew up in Wisconsin, and lived in Madison when I was an undergraduate at the University of Wisconsin, and later for a year after I finished my MFA. As a staunch, pro-union, Democrat, it warms my heart to see the people rallying in and (now, unfortunately, due to a court order) around the state capitol building, standing up for their right to collectively bargain, to lobby as a group for a better future, and for secure working conditions.

I have been worried, though, that the rallies in Madison have been eclipsed by other, admittedly very important, news events, and that perhaps the mainstream media is beginning to ignore the protesters who have been bravely withstanding cold weather and police blockades to rally for their rights. I was beginning to worry that the insult hurled by Wisconsin state senator Glenn Grothman at protestors, that they were a bunch of “slobs,” was coloring the media perception of the rallies happening in Madison, making it seem like the people rallying were just so many unwashed radicals with nothing better to do. (Shame on you Glenn Grothman, for perpetrating the classist assumption that working class people are “unclean.”)

That’s why I was so excited to see that yesterday Oscar-winning film maker Michael Moore came to Madison to speak at the ongoing rally. I hope that his speech with draw honest media attention to the protestors, and will show the rest of America how resolute and un-slob-like Wisconsinites are. You can watch the video of his speech yourself, and I suggest you do. It made me tear up.

I won’t paraphrase it at length here, except to say that I am very concerned about one particular point which Moore raises in his speech: that the wealthy have succeeded in “controlling the message,” that they have succeeded in maintaining the illusion that the state and federal governments are “broke,” when in fact, they have been lobbying and supporting Republican politicians to drastically cut their taxes, creating massive deficits, while at the same time using clever but empty rhetoric to convince millions of working-class Americans that if they work hard and don’t rock the boat and vote Republican, they too could one day be wealthy. Moore’s point: this is an ILLUSION. I couldn’t agree more, which is why I think it’s so important for the protesters in Wisconsin to keep protesting, for the fourteen Democratic state senators who bravely fled Wiscons in to stay strong and stay in Illinois, and for all of us who are pro-worker, pro-labor, pro-America to let Wisconsin know that we are still paying attention, and we are standing with you in solidarity!