Why is the Jeopardy! computer a dude? 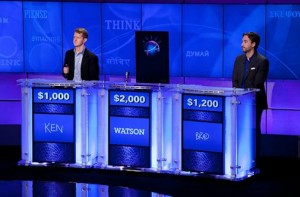 Two men and a man-puter duke it out on Jeopardy!

In the world of game shows, Jeopardy! is the closest Americans come to measuring genius in a tidy 30 minute Q&A format with a cash prize. In an attempt to make Jeopardy! seem as smarty-pants as chess, IBM has made a Jeopardy! playing computer named Watson, who will take on the two top Jeopardy! champions of all time, Ken Jennings and Brad Rutter, on February 14-16. The computer has an automated male voice.

I love Jeopardy!, but, and I’m sure I’m not alone here, I’m a little dismayed that this battle between man and machine is, well, such a battle between man and machine. While the creators of the IBM Watson computer and Jeopardy! had no control over the fact that the top two Jeopardy! winners of all time are male (or did they? perhaps Jeopardy! needs to examine gender bias in its choice of trivia questions), the folks at IBM certainly had control over whe ther their super Jeopardy! computer was gendered male (or gendered at all, for that matter), and they chose to not only make it a “male” computer, but to give it a super WASP-y name, “Watson.”

I ask you, IBM, and Jeopardy!, why not give your super trivia computer a female voice? The answer, perhaps, is that when most people think “genius,” they think male, despite the fact that ladies all over the world are showing off their smarts day in and out. Representations of male genius abound in pop culture. Think movies like Little Man Tate, Wonderboys, A Beautiful Mind, The Social Network, or TV shows like Numb3rs, Law & Order Criminal Intent, or House. In all of these examples, we see the lone male genius, troubled by big questions, thinking, solving problems, stunning onlookers with his deductive reasoning and/or creative powers. Women operate in the periphery, fixing male geniuses breakfast, washing the laundry of male geniuses, doing the paperwork and bookkeeping for male geniuses, or offering to sleep with male geniuses (Wonderboys, I’m looking at you). Representations of female genius in pop culture, sadly, are few and far between.

Jeopardy!, I will watch your man vs. computer showdown because, frankly, a Jeopardy! playing computer is unbelievably impressive, but I ask you: please consider the way that you are playing into a tired, old gender stereotype with your battle between man, man, and man-puter.