The Sunset Limited: Cormac McCarthy’s eulogy or anthem to meaning?

[Spoiler Alert: this post contains information about the ending of the play] 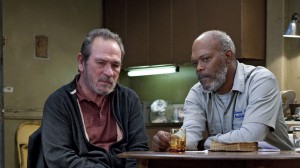 HBO has long benefited from a reputation for taking chances on risky material. Some of these risks spawned culture-changing juggernauts like “The Sopranos”, while others teetered then rapidly fell into abject failure (“John from Cincinnati” comes to mind).

While entertaining the possibility of creating a one-shot episode based on a Cormac McCarthy play may not seem risky (McCarthy’s work, after all, has already earned the highest acclaim the film industry offers), the ability to convincingly execute McCarthy’s v ision is an altogether different matter. As a play, “The Sunset Limited” earned praise as a brilliant but decidedly nontraditional theatre production. In fact, a few notable critics (such as Chris Jones of The Chicago Tribune) refused to acknowledge the work as a play at all, while still crediting its author’s evident genius.

The HBO production was forged with two key ingredients: the gifted actors Samuel L. Jackson and Tommy Lee Jones. These gentlemen sit among few peers in modern film, and placing them in a two-man production could have gone really well, or might have erupted in a war of titanic egos. Thankfully, the former won out, and the result is quite simply magnetic.

Jackson’s character (never named, but called “Black” in the play) is an ex-con with a violent past. He served time in the “jailhouse” for murder, and spent most of his life as a serial hustler. He also happens to be a math savant; an ability that he says made it easier to “hustle the brothers.” After a prison fight that nearly left him dead, he claims he heard the voice of God, and forever after determined to set his life on a new path, one that requires him to love his brothers instead of victimize them. With a combination of street cunning, bottomless wit and native intelligence, Black is a formidable evangelist, and one that walks his talk. He chooses to live in a tenement brimming with junkies and dealers and frequently lets junkies stay at his apartment, knowing full well they will try to steal anything they can. He owns only the bare accessories of urban life, and seems entirely at ease with his choices, while admitting that they are difficult for most others to understand.

Lee’s character—called “White” in the play, but referred to as “the professor” by Black—is indeed a professor, and apparently one with notable accomplishments behind him. His life, in his eyes, is over, and he wishes it to end in a very specific way: on the tracks of The Sunset Limited commuter train. It is when he attempts to jump from the platform in front of the train that Black rescues him and brings him back to his apartment as he has a legion of junkies before.

From this initial encounter emerges a range and depth of dialogue with few cinematic equals, at least to my memory. White is an atheist, but a man with deep cultural convictions who believes that the world as he knew it has ended, or will end soon enough. “The things that I love are fragile” he tells Black, suggesting that they have shattered amidst the decay of culture—a world changing too quickly for anything of depth and substance to survive for long. He has simply seen and experienced enough; he has tasted decades of life and found it lacking more with every passing year. He is “done,” and he wants to leave before the final, abysmal end arrives.

McCarthy weaves the “ending of worlds” theme through much of his work. In “No Country for Old Men”, the sheriff dwells upon what the world has become during his lifetime and cannot come to grips with the senseless tragedy he watches materialize more each day (this theme is far more acute in the book than the movie, which underplayed what very well may be the most important element of the novel).  In “The Road”, McCarthy forces us beyond the metaphorical threshold into a literal ending of worlds, though certainly not one without a small hope for recovery—the “fire” of civilization that some of the survivors still carry in their hearts.

“The Sunset Limited” again challenges us to see through the eyes of someone for whom life is an empty shell where interest, ideals and imagination once lived. But we are also challenged to take on the perspective of a man who has lived the worst of life, but still chooses the optimistic path–who still cherishes the “warm light” of life that he sees in everyone he encounters.

For much of the interaction, we do not know if White is sincerely invested in taking his life, or if he is reacting from deep but temporary despair.  Black is banking on the latter, and his efforts are focused on moving White beyond the darkness by showing him that every junkie (and he considers White a “culture junkie”) does not realize that every dose of their drug is a replacement for what they truly want, whether they know it or not: the love of God. Black is no shallow preacher for his cause. His approach is subtle, skillful and profound, and at various points it seems as though he may be reaching a part of White that may even be taking White by surprise.

As the final act—a span of perhaps 20 minutes—begins, we learn that there is a more entrenched truth to be understood by Black and the audience, though it is not what the street evangelist had hoped. White opens a well into his darkness, and it is so all-consuming that Black is struck speechless. White brings down upon the small room a terror of revelation that makes even Black’s horrific prison stories seem trite by comparison. We are witness to the abyss brought to bear with terrifying precision by Tommy Lee Jones. Black is the most physically violent man in the room, but it is White who wields an intangible violence that overpowers his interlocutor’ s body and mind.

Not only is White committed to suicide as the proper end of his existence, but to not end his life is a betrayal against all that he once loved and lost—a final salute to a dying culture without hope for renewal. Black, after hearing White out, slowly lifts his head from his hands and asks, “How long have you felt this way?”  “My entire life,” replies White, as if to say that in a sense he always knew this end was coming, and now he not only accepts it, he welcomes it.

McCarthy leaves us with few guesses. When White exits Black’s apartment, we feel certain that he’ll soon take his life. Black, now alone, lashes out at God, asking why he wasn’t given “the words” that could have reached White. “You gave him [White] the words!” he yells at the ceiling. Black then reaffirms to God that despite this loss, he will still always stand behind “the Word.”  The final words spoken, again to the sky: “Is that Ok?”

And that, ultimately, is McCarthy’s revelation to his audience: words are the medium of all meaning. Whether one believes those words are spoken to him by God, or reads the words on the pages of scripture, or consumes the words spanning a universe of literature—or simply uses words to survive on the streets. Words define that which is meaningful to us—that which we are willing to devote our lives to despite tremendous odds or dire consequence. And words also carry within them the darkness that drives some to a grateful meeting with death, and others to a painful exchange with their God.  Black and White—the characters and the ontological positions—are inadequate arbiters of such power, as are we all.

Next post: How does it feel to be a problem? The Vida Study