by Amanda Leigh Lichtenstein on February 10, 2011 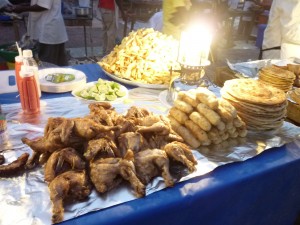 Last night at sundown my Zanzibari boyfriend and I decided to take a stroll over to Forodhani gardens for a coffee & sunset. On our way there, we stopped to look at an outdoor photo exhibit on display at the House of Wonders, hosted by the German Goethe Institute. The Germans have a lingering love for Tanzania. Is it because of their short-lived presence here? Nagging architectural failures? Their desire to make right a colonial wrong ? Anyway, the black and white photos of sea-life were interesting enough, so we lingered.

A few feet away, a cluster of folks with backpacks and an enormous video camera poured out of a parked mini-van. I was curious, so we asked them what they were up to here in Stone Town. Suddenly, we were in a filmed conversation with two travelers looking for a place to crash for the night. They were on a French reality television show called Pekin Express, which is like the American version of The Amazing Race.

I admit, the critically-conscious version of myself dashed and the reality-tv-show loving freak in me appeared. Sure! You can stay with us! Babu Ali, my boyfriend, agreed happily and so we, the couple, the camera man, his assistant, and the director, all walked to our little apartment, the camera man dashing in front of us, walking backward clumsily with his video camera to make sure he filmed us having awkward conversation with the Frenchies who barely spoke English.

We weren’t sure if our place would be accommodating enough but they assured us that they had lucked out. Each night the contestants have to hitch-hike from place to place, face a variety of games and challenges, and at the end of the night find a free place to stay. They’ve stayed in mud huts, roadsides, and cluttered beaches. So our air-conditioned, internet-wired abode was a palace to them and they were happy.

We decided to head to the local pharmacy to get rubbing alcohol for Niko, who had suffered a minor motorcycle accident earlier that day. We walked through the winding, narrow alleyways of Stone Town, stumbling through more awkward, amped conversation. Lots of head-nodding and smiling. I was a little appalled that the camera man filmed inside the pharmacy without even so much as asking for permission. Nope, just walked right in there, bright lights shining on the fully covered Muslim ladies working behind the counter.

With just a few take-two’s here and there to get the “right” shot of us leaving Karibu Pharmacy, all smiles, we stood in a circle outside discussing dinner plans, locals hovering close by, curious about our little spectacle. God, I would get so annoyed if I was filmed like this all the time, what a drag! Your whole life becomes a take-two. Everything is staged. I was beginning to wonder when these guys were going to leave! Would they stay with us all night, the film crew, I mean?

The contestants have no money on them, so I spotted dinner at the nightly food market — heaps of grilled squid, fried chicken, greasy chips, and grilled sweet bananas, all purchased in Swahili under the gaze of the camera’s brightest lights. We were told to go straight home with the food so they could film a “fake sleep” before the crew went to their hotel for the night. Being directed at every step was getting a little ridiculous. I st arted to get annoyed with the director when she told me in her thick French accent to adjust my headscarf to make it look, like, a little more “casual.” What?

We stopped to get sodas on the way back to the apartment. Even the camera man, production assistant, and director requested a soda and I was like, um, really? You don’t have a budget for your own sodas? But whatever, this all becomes about hospitality. Every little reaction is up for grabs as a possible gaffaw on national French television. Be the good American, I kept reminding myself.

Back in the apartment, they filmed a fake “good-night” scene, and then the three production folks left, leaving us alone with the two contestants. Ingrid is a hot French gal in her late twenties, Niko is a sweet looking guy who is 30 years old. We chatted about love, Islam, family, and travel, both claiming that they were having the time of their lives.

Ingrid started asking me a lot of questions about my relationship with B. Ali. The island of Zanzibar is 98% Muslim, so she was curious about how this mixed-faith relationship was working for us. I wanted to break it down with her, but I started to feel paranoid that everything I said could be fodder for her monologues on the reality show, so I kept it brief.

That night, Niko and Ingrid indulged in off-limits internet (told us not to tell the producers!), took hot showers, and watched Al-Jazeera coverage of the Egyptian revolution. Ingrid talked about her long-distance romance with an Italian man, while smoking cigarettes in my open-air kitchen. Niko showed me his nightly journal and gentle sketches of life on the African road.

After a while, we staged a few timed group photos and then said our real good nights. Ingrid and Niko had to wake up at 6 a.m. the next morning with no clue what was in store for them, except that it would involve water sports. Sounds like a crazy rigorous contest — they had to climb Mt. Kiliminjaro in 2 days. I could NEVER be part of a show like this, you have NO control over your life for 45 days. Every move you make is a performance.

Babu Ali and I woke at 6:30 a.m. or so and scrambled to give them a good breakfast but the quirky, upbeat, chain-smoking, frizzy-haired director came bouncing up the steps at 7 a.m. on the dot to gather her contestants. She was very bossy and stern about the clock, so we quickly threw some mandazi and granola in plastic bags. Niko requested he take our jar of strawberry jam. Fine! Take it!

We said our staged but real goodbyes and promised to keep in touch.

So, what about the ethics of shows like this ? I’m all about the random encounter, but this left me wondering how the show might portray East Africans, or even someone like me in an East African context. There’s also the money question. Someone must be making a hell of a lot of money off a show like this, but the locals who come in contact with the contestants every step of the way get nothing. Local people are then caught in a catch-22: if they don’t welcome the contestants, they risk appearing inhospitable and rude. If they do welcome their guests without compensation, they are suckers in a huge game of globalization madness.

There’s always the mutual benefit of cultural exchange, but set against the backdrop of capitalist reality shows of any kind, it’s pretty clear that locals get the short end of the stick.

In our case, there wasn’ t much to lose. What’s twelve hours with two French contestants on a reality show? But I’m wondering about the Masai family who welcomes a team, or the broke down farmers, or the shy Swahili coastal family. What do they get from something like this? And the largest looming question — how does Zanzibar benefit from the invasion of reality television on their vulnerable, pillaged island?

I like that Ingrid’s Rolling Stones t-shirt was forgotten in our bathroom, tossed casually on the door handle like a real roommate. It was sweet hearing Niko talking in over-excited French to his twin brother in France via Skype. It’s kind of endearing that the smell of their body odours (perfumes, colognes, travel-sweat) still linger in our tiny apartment.

I am curious, though, how all of this will get portrayed. Did they catch me in a moment of fatigue?  frustration? Was I real? Real enough?

Guess I’ll have to stay tuned for the eventual broadcast on French television.