Navaratri: Nine divine nights and one attempt at learning a goddess dance

by Amanda Leigh Lichtenstein on February 23, 2011

I lucked out, living in Hurumzi. I live right by a small, tucked away Hindu temple. As a Jewish-American woman living in a predominantly Muslim world, I’ve sometimes taken comfort in the “otherness” of Hinduism here, visiting the temple, barefoot, on my days off, just to enjoy the cavernous silence of its inner courtyard — the eternal shimmer of Gods’ many eyes twinkling at me behind smudged glass boxes.

I believe in god. I believe in no god. I believe in many gods. It depends on my age, level of personal crisis, ability to love and be loved. Sometimes I enjoy the online-dating approach to finding god, reading their many profiles and trying to find a true soul mate based on quick facts and boxes checked: Fire and damnation, mm, no. Forgiveness, sounds good. Eternal paradise, great. Inner peace, you got me. Believing my gay friends burn in hell, yuck, so not for me. You speak through tree s? I think I’m in love. When it comes to god, I go on first dates. I get married. I get divorced. I’ve had many gods, but I always come home to the one who speaks to me about compassion.

Last fall, I’d heard about the Navaratri (Nine Nights) festival and decided to go with my friend Sara one night, just to check it out. Not because I’m desperately seeking Durga, but because I’d been dazzled by the blingtastic sari-clad women and tassel-hatted men parading by my house on their way to and from the temple, and I wanted to be a part of all that sequined devotion. I didn’t know anything about Navatri, but when my kind neighbors (who fry and sell samosas daily from their foyer) told me I was welcome to stop by, I was delighted, and determined.

“Navaratri” literally means “nine nights,” in which the energy of the goddess in her many forms is invoked by celebrants who pay homage to the twin energies of creation and destruction. But I didn’t enter the temple on the fourth night knowing what to expect. At around 9 p.m., Sara picked me up by foot and we walked to the temple, eager to find out what awaited us, but also trying to be nonchalant about it.

Affixed high up in a tucked-away corner of Stone Town’s labyrinth is a humble, hand-painted sign in red letters that reads: Hindu Temple. We found ourselves ambling down a long, narrow outdoor hallway where men lined up wearing their finest, some leaning against the wall, casually drinking strawberry milk. They were all peering into the room across from them, through open windows, where ritual preparations were underway but had not yet started.

At the end of the hallway, we reached the great inner-courtyard where many gods were on display as usual. This time, the wide, white-tiled expanse was filled with women bedecked with bindis, luscious saris exposing mid-drifts of all sizes, and faces painted with long lashes. Ornate gold and ruby jewels held their hair in twists, sometimes draped over the entire crown of their heads. Little children paraded around in their finest Gujarati children’s wear, playful jester pants with little ankle bells, smart royally-embroidered jackets, caps with tassels, and girls’ hot pink & puffy gowns that looked like Princess Diana’s dream inside a dream.

Sara and I slipped off our sandals, threw them into the pile of shoes stacked at the entrance, and sat down on the temple steps, breathing in the festive, incense-fused night air. Murmurings of the dance began to pulse through the crowd. They were starting soon. A women’s only circle-dance around a heavy-set woman (a goddess, herself, it seemed!) who would stand in the circle’s center, attempting to channel the goddess Durga otherwise known as Shakti.

Women of all ages and shapes started heading toward the long yellow-painted room where the dance would take place. Lanky women, short and squat, a woman with a wandering eye, the woman with bad acne, the woman with a spinal scar, the woman I recognized from that one shop, they were all there, ready to move in a dizzying spell of worship to the mother goddess of all life’s energy and creation.

Though invited in to the dance, we hesitated at first, standing outside along the wall with the men, leaning and watching, wondering if we could follow along. What started out as a slow tabla beat hit by three young boys and a chubby teenager girl reciting high-pitched chants through a hand-held mic, grew faster and faster as time wore on. The women’s footwork matched the beating of the drum as they kept spinning.

From the outside looking in, the steps seemed easy enough, so after a good twenty minutes of shy anxiety, I was entranced enough to want to join this endless circle of women.

Luckily, Sara agreed, and we found ourselves giddy at the doorway, trying to figure out the precise time to jump. It was as if we were at the ledge of a pool. The rhythm of the drums never let up, the bursts of incense never dimmed, all energy was growing more feverish and pulse-driven by the second. So at some point I just stepped in, grabbed hold of two women on either side of me, and attempted to be carried through the circle with their guidance, losing Sara along the way.

And then I was dancing.

Tripping on my feet, attempting to talk, apologize, laugh, anything to hide from my ridiculous self, my wild ignorance. I’d made it one full circle before I even remembered that I had legs, and that they were connected to my body. The women were mildly amused but not at all effected by my clumsy attempt at belonging. At first, I just couldn’t lock into their steps. They kept dancing with floating feet, repetitive ritual moves that would bring them closer to their goddess. It was this energy, after all, that had created all of us, created the seeds that would become the bones and blood that would become us, dancing.

After several orbs, I found myself in step with the rest. I’d lost myself, stopped thinking so hard about it, and oddly enough, just threw in the well-worn steps of the famous Jewish celebratory dance, “the Hora.” Hey, a circle dance is a circle dance! I was a little off at times, but between Durga and Yaweh, I was getting something right.

We danced in endless, pungent circles, divining the energies of the goddess in all forms. And I do believe it was Durga, her lotus, her thunderbolt, her sword, who kept me spinning that night, released from all fear, in a dizzy spell of faith and joy. Durga, channeled, energy, invoked.

Those who come from that long line of Abraham, Sarah, and Moses often frown upon the kaleidoscopic splendor of Hindu cosmology, shaking their heads at that radical desire — will, really — to create worshipful idols or blinged-out goddess statues, not to mention an incredible array of posters, stickers, and mini-altars.  To some, it’s blasphemy. It’s madness. To others, it’s divine and real, calling our attention to those millions of doorways flung wide open in the great universal theater of the soul, behind which we are beckoned or admonished by many, many versions of ourselves.

That night, when I thought I would not belong, it was the dance that saved me. I thought: American Jews need a whole lot more of this goddess invocation stuff at the local synagogue. I left feeling closer to my Indian neighbors, and to that version of myself in Zanzibar who walks home with a plastic cup of strawberry milk, contemplating her place in the great wide universe, very much believing in the divinity of a sky full of stars.  It’ s their energy that made me, the godde ss Durga tells me so. 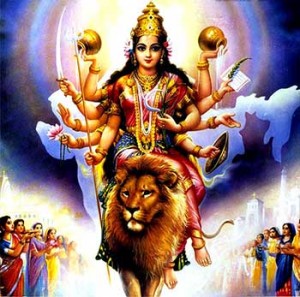