The Meursault Investigation
by Kamel Daoud
Other Press, 2015 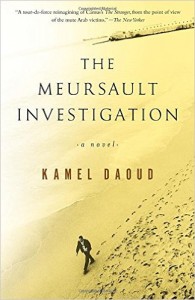 Kamel Daoud’s debut novel is a relentless reply to Camus’ The Stranger. It’s told from the perspective of the murdered Algerian’s younger brother, Harun, now an old man. A young Algerian, presumably a stand in for the author, has pinned down the old man in one of Oran’s remaining dive bars and is asking Harun about his anonymous brother, whom we are told was named Musa. Harun, somewhat grudgingly at first, tells his tale and justifies the book’s narrative.

His tale is about victims, the stories they re-tell and re-live and about what happens to the individual in such a crucible, which in itself is a metaphor of an oppressive society. But if this premise doesn’t sell you on reading the book, Daoud’s masterful prose will, as it clears for Harun his own place in the cannon of world literature.

Harun’s often plaintive 143 page rant only has a few narrative drops and these are followed by pages upon pages of analysis. But Daoud, within a few paragraphs, hooks you with the acerbic, wine-soaked voice he’s crafted in Harun. In Harun, Daoud sounds like he’s channeling the old waiter in “A Clean Well-Lighted Place”— if you got him drunk enough.

The pages crackle with Harun’s frequent and peppery aphorisms, like this one:

“As far as I’m concerned, religion is public transportation I never use” (65, ch 7).

The old man’s curmudgeonly wit helps the narrative keep its balance through some of the more heavy-handed passages that read less like a novel and more like a post-colonial lit professor’s class website—not that these passages are any less memorable. Let’s take this one, commenting on Camus’ writing:

“Everyone was knocked out by the perfect prose, by language capable of giving air facets like diamonds, and everyone declared their empathy with the murderer’s solitude and offered him their most learned condolences” (4; ch. 1).

Here, in his critique of Camus, Harun sounds like Achebe critiquing Conrad. In true irony, Camus has become nothing but another Foucauldian proof that language—even language meant to liberate— oppresses and domineers those on the margins. But Daoud fights back, filling the lacunas in Camus story with his own meaning, creating an inversion of The Stranger almost mathematical in precision.

Perhaps the core example of this is contained in the first line, “Mama’s still alive today” (1, ch. 1), the exact opposite of The Stranger’s first line.

Though the death of his mother is the inciting incident of Meursault’s problems—Harun’s problems are defined by his mother’s persistent life.

While Daoud is sure to name all of his characters—even Joseph, the Frenchman Harun later murders—the mother is the only character left without a name. Yet she is not a cipher like Camus’ Algerian. She is an indomitable presence that shrouds Harun’s life and the novel as both fully character and fully symbol.

Musa’s name and injustice rings out throughout the book (Harun’s own name is only mentioned twice). And there are many times you wish Harun would talk about something else. But for him there is nothing else, and not just because of Camus’ glossing over of his brother in his now famous volume.

“As a child, I was allowed to hear only one story at night, only one deceptively wonderful tale,” Harun explains (15, ch. 2)

And of course, it’s the mother telling and re-telling this tale to Harun, her surviving son. Just as The Stranger is a story about being unmoored from moral and familial certitudes, The Meursault Investigation is an incessant story about being bound in familial guilt. For Harun, it’s the guilt of being alive.

The mother dresses Harun in Musa’s clothes. She ignores him after Musa’s death while alternately smothering him. “I was sick a lot,” Harun narrates. “And throughout every illness, she’d watch over my body with a practically sinful attention, with a concern tainted by a vague undercurrent of incest” (41, ch. 4).

The Norman Bates vibe continues as the mother shuns Harun’s only love interest and coaxes Harun to murder Joseph, a Frenchman taking shelter from the Algerian uprising in the family’s backyard. Harun’s nihilistic moral complex, his isolation and lifelong malaise arises from this action:

“I killed a man, and since then, life is no longer sacred in my eyes. After what I did, the body of every woman I met quickly lost its sensuality, its possibility of giving me an illusion of the absolute” (91, ch. 9).

Like with Meursault, the mother is the source of Harun’s strangeness from his countrymen (and women). And these same countrymen run parallel to the mother figure as a force of censure against Harun’s individuality.

Harun is lambasted by an Algerian colonel for his murder of the Frenchman Joseph, not because of any moral law, but because he didn’t kill him during the revolution.

“I found their casual attitude toward my crime almost insulting. Only the timing seemed to pose a vague problem” (111, ch 11).

And so, in the face of absurdity, the enmity between Harun and his countrymen deepens. Harun only adds to the antipathy in his inevitable Meursault-like rejection of his country’s dominant faith:

“I don’t like anything that rises to heaven, I only like things affected by gravity. I’ll go so far as to say I abhor religions. All of them! Because they falsify the weight of the world” (69, ch 7)—a weight which is Daoud’s chief concern as well.

In interviews, Daoud has distanced himself from his character Harun, replying to extremists that the book is his character speaking, not the author. But one can’t help notice the analogous relationship author and character have with their Islamic society. Daoud, the critically minded journalist and social critic, like Harun, refuses to leave Oran—despite the current Fatwah out against him for his writing, which, like the best writing is zealous not for metaphysical platitudes but for the details and misery of existence, of which Algeria seems to have no shortage.

Daoud’s novel is oppressive, hot and illuminating with perception as incisive as that infamous Algerian sun. With such perception, he illuminates Harun—someone who is a stranger to Western and Algerian societies. Like Camus’ novel, Daoud makes us identify with someone who is truly ‘Other’. In that sense, the book is finally not a critique, but, as Daoud claims, a tribute.

“At the moment when I committed my crime,” Harun says. “I felt a door somewhere was definitively closing on me. I concluded that I had been condemned—and for that, I’d needed neither judge nor God nor the charade of a trial. Only myself” (87, ch 9).

Unlike Meursault, Harun has no trial. Instead, he has a bar. His absurdity isn’t on the world’s stage. It will play out only in his head.

“It’s essentially a private performance,” he explains. “With me as the sole protagonist” (88, ch 9).

But Daoud does the writer’s job of giving this stranger voice. Ironically, thanks to Daoud’s imagination, Harun now has a world stage—one that should continue to grow, as readers and publishers discover Dad’s talent, captured in this passage which highlights both the isolate pain of the individual and the artist’s necessarily existential sphere:

“Then evening came along with a handful of stars, and the darkness dug a hole in my cell, blurred the outlines of the walls, and brought a sweet smell of grass. It was still summer, and by peering into the blackness I was eventually able to glimpse a bit of the moon, which was slowly sliding my way. I slept again, for a very long time, while unseen trees tried to walk, flailing about with their big branches in the effort to free their black, fragrant trunks. My ear was glued to the ground of their struggle” (106, ch 10).

Shaun McMichael lives in Seattle with his beautiful wife. He teaches ESL to adults, but for the previously six years, he worked with youth with disabilities and mental illness in various settings, teaching them writing and other subjects.