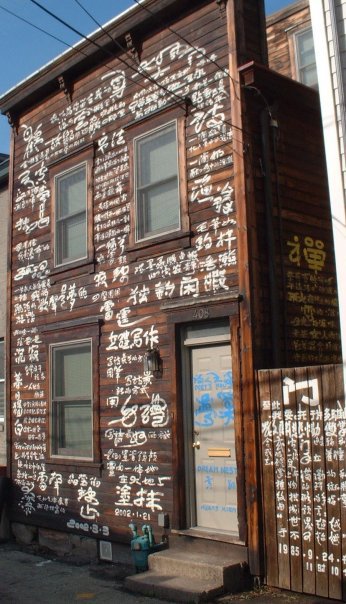 Pittsburgh is a city primarily known for its bridges, sports teams and sandwiches made with french fries. However, within the Mexican War streets of the Northside neighborhood, one can expect to find something a tad out of the norm for the Steel City — a narrow alley called Sampsonia Way.

What Sampsonia Way lacks in size, it makes up for creatively, artistically and also socially. Not only is it home to the city’s eccentric Mattress Factory, a contemporary art museum, but it also hosts City of Asylum/Pittsburgh, a place of refuge for persecuted writers from around the world.

In 2004, City of Asylum/Pittsburgh welcomed its first writer-in-residence, an exiled poet from China named Huang Xiang.

Having been imprisoned six different times and forced into hard labor, Huang Xiang gained accolades worldwide for his poetry, and once he made his way to Pittsburgh, he continued writing poetry any way he could – including on the walls of his new home.

Known as House Poem, Xiang’s home has become a symbol of  City of Asylum’s mission. It is one of several houses on the block available to visiting authors and journalists from around the world.

In 2009, Sampsonia Way Magazine w as formed as an outlet for not only the exiled writers living on the street the magazine was named after, but for oppressed writers all over the world. Working with City of Asylum/Pittsburgh, the online magazine brings awareness to poets, novelists and journalists who face or have faced censorship and persecution for their work and sheds a light on freedom of expression issues worldwide.

The current issue features articles on the Afghan Women’s Writing Project, which centered on creating an atmosphere where women in Afghanistan would feel comfortable enough to write openly and freely.

Previous issues focused on the plight of the Cuban people to gain internet access and express their opinions freely online as well as a feature on the first City of Asylum in Las Vegas, which opened its doors for writers from China, Iran and Sierra Leon back in 2001.

Currently the publication is working with Khet Mar, the current writer-in-residence at COA/P, a writer who fled Burma after facing arrest and torture. She now lives on Sampsonia Way with her two sons and husband. Like Xiang, Mar and her husband decorated the outside of their house by painting a mural incorporating Burmese writing.

Previous post: Screw your spirit of inquiry, make us lots of money.