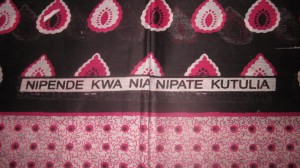 Some people think it was my love for a certain local fisherman that brought me back to Zanzibar. True, I did fall in love. But it was my obsessive love for kangas — those vibrant textiles inscribed with poetic Swahili text messages at the bottom — that truly seduced me. The ubiquitous kanga, worn by women all over East Africa, is the  ultimate text message,  mobile metaphor,  stitched secret, the poem wrapped around one’s body in dazzling parades of ambiguity.

I first fell in love with kangas when I was a living and studying East African literature and culture at the University of Nairobi back in 1996. As a novice Swahili speaker, I could barely decode the deep Swahili scripted on each kanga. But I happily wrapped them around my hips, stumbled through their meanings, and so began my life-long kanga obsession.

The kanga cloth itself was like a living literature — a multi-faceted, multi-functional, eye-poppingly gorgeous fabric that doubles as a message in motion. I set out to learn more about this incredible textile whose designs pretty much explode at the corner of function and fashion. It was the kanga, and the desire to develop a poetry project with women using the kanga as a curricular spark, that propelled me back to Zanzibar.

There is nothing quite like the kanga cloth anywhere else in the world. A rectangle of pure cotton cloth of dizzying designs and patterns with a border around it, it dominates the fashion landscape, especially along the Swahili coast. Women typically purchase the kanga as a set, cut the squares in half, and wear one as a head scarf or shawl while the other is wrapped around her waist.

Originating on the island of Zanzibar in the late 1880’s, the fashionable cloth quickly spread along the Swahili coast and eventually became a cultural emblem, acting as a social conduit for complex cultural, spiritual, and political expression. The cloth, whose name derives from the Arabic word “khanqa” or cloth, represents an intricate history of trans-oceanic trade among African, Arab, Indian and European societies. A few scholars assert that the word kanga refers to the “guinea fowl,” because when women wrapped themselves in the original black and white polka-dotted pattern, they resembled the chatty, sociable bird.  Others disagree with this claim. In any case, the kanga is a living record of Swahili obsessions and transgressions, values and beliefs.

Some say the kanga was popularized among recently freed slaves in the late 1800’s who began wearing the kanga cloth as an expression of equality among their former Arab masters. Where there was Arab trade in East Africa, there are kangas now as a legacy of that contested period of epic trade history. 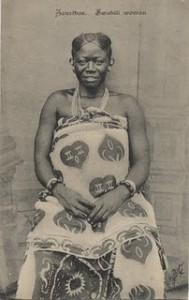 From dusty rural villages to bustling cities, women and children wear and/or use the textile on a daily basis. The kanga and its poetry is woven into the cycle of life. Babies are born into kangas, elders are wrapped ceremoniously in kangas when they die, girls receive a kanga for her first period, they are worn during adolescent initiation dances and ceremonies,  a bride is inundated with kangas as part of her dowry. During the actual ceremony, the bride wears the kisutu — a special wedding kanga resembling a bandana of red, black, and white. The kanga is also employed as a baby carrier, sling, rug, curtain, head pad for carrying buckets of water on the head, tablecloths, mosquito nets, laundry baskets, ropes, and blankets. The kanga reigns supreme.

Even in the spirit world, particular spirits each associate with a different kanga design, color, style and message. Those afflicted or possessed by spirits sometimes attend exorcism ceremonies during which specific kanga colors are chosen to either call attention to, appease, or hide from the spirits.

Everybody knows, though, that the significance of the kanga lies in its message. A kanga is not a kanga without its jina (name).

Legend has it that a famous trader named Kaderdina Hajee Essak, known as “Abdalla” of Mombasa, Kenya, decided to distinguish his kangas by adding Arabic script to the bottom of his cloths in the late 19th century. The trend spread like wildfire. Today, the majina (messages) are written in capital block letters in black against a white background, often in Swahili using the Latin alphabet, though sometimes there are messages in English, too.

In a society that values extreme politeness, frowns upon direct forms of communication, and certainly does not encourage public expressions of rage or sorrow, the kanga is an essential non-verbal, indirect form of communication among girls and women. And because of the strategic ambiguity of most kanga poetics, both the giver and receiver remain somewhat protected in the abstraction of metaphor. Intentionally puzzling, Zanzibaris often refer to Kiswahli on kangas as “lugha ya ndani” — inner language. The best kangas are totally mafumbo (ambiguous), riddled with playful and perplexing double meanings.

The kanga is typically exchanged woman-to-woman, but sometimes the exchange is once or twice removed, making it even more confusing to trace back original intentions and feelings. In some cases the kanga is used to assert, question, or reestablish a power dynamic.

Let’s say, for instance, that I’m having a fight with my irritating friend who is sort of jealous and unmotivated (this is just an example!). I might give a kanga to my friend’s sister with a message like, “don’t set sail on someone else’s star” which is truly intended for my friend. I trust that my friend will see her sister wearing the kanga I gave her, ask who gave it to her, and, if she’s aware of tension between us, know secretly to read the message as intended for her. Even if she wasn’t aware before, the kangas and its giver will be some indication that a message is being sent in her direction.

All of this is unspoken of course, and it’s never the exact same rule or effect that applies to each scenario. That’s what makes kanga exchange an intricate, nuanced, playful, and often secret form of communication of among women.

I’ve heard stories of neighbors not on speaking terms for five years due to a hurtful kanga exchange having to do with a message about a good neighbor being one who knows how to remove (kill) the snake from its wall.  The receiver felt offended, assuming that she was being blamed for her alcoholic (snaky) brother wreaking havoc on the village after faltering and moving back home. She silently dropped off an equally offensive kanga to her neighbor asking her to mind her own business, and two have not spoken since.

This story was told hearsay, but other Zanzibari friends of mine have confirmed the ultimate power of the kanga to strengthen, destroy, or confuse relationships, without ever having to say a word.

From love triangles to bitchy gossip, jerky boyfriends to deep disappointment, infidelity to laziness, god’s wrath to finding one’s path, it seems like there’s a kanga for every situation that no one can really talk about outright. 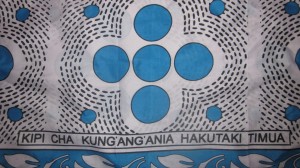 Kipi cha Kung'ang'ania Hakutaki Timua/What Are You Holding On For? He Doesn't Want You! Leave Him! 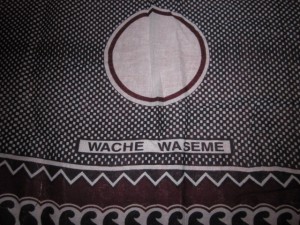 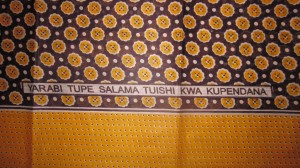 At just $2.66 cents per pair, the kanga is fashion-forward and affordable for nearly everyone, and urban women admit to either purchasing or receiving a kanga at least once a week. Sometimes the kanga is chosen, indeed, to communicate the ineffable. Other times, the design is more compelling than the message, and they are exchanged merely to celebrate or cheer. But a woman never buys a kanga for the design alone without first at least checking the message to make sure it won’t, at the very least, offend. A man eager to bring his wife a kanga as a gift tries to find just the right message. If you ask a kanga merchant (mostly men) for a recommendation, they usually have hundreds of kanga proverbs memorized, and just by pointing to a wrapped kanga, he can recite its riddle to you according to its pattern.

And he’s not alone. Most Zanzibaris know kangas poetics by heart. Someone can throw out a puzzling proverb at a moment’ s notice if the situation calls for it. And even if life’s just unfolding as usual, the kanga and its messages are threaded through every facet of public life as women move about wearing their secret messages at the hip. Poetry is everywhere.

The kanga is like a giant social poetry performance, a collective reading,  an enormous living book of poems bound by the body, by all who read (interpret) and live its words (and many meanings).