Dear Los Angeles Times, this is a photo of Jennifer Egan

Regarding your headlines* today on the National Book Critics Circle Awards, the photo you posted is not Jennifer Egan. In addition,  I would also like to point out that you mention the name of Mr. Franzen’s novel, the one that didn’t win but it’s true was written by a male, while you merely allude to the novel that in fact won the award as “work.” Granted, A Visit From the Goon Squad has more words in it, but it did win. May I suggest the following changes:

The nonfiction award goes to ‘The Warmth of Other Suns: The Epic Story of America’s Great Migration.’ 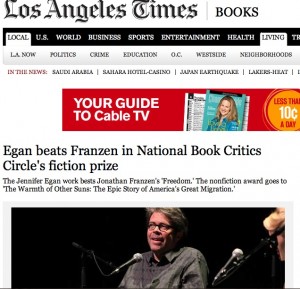